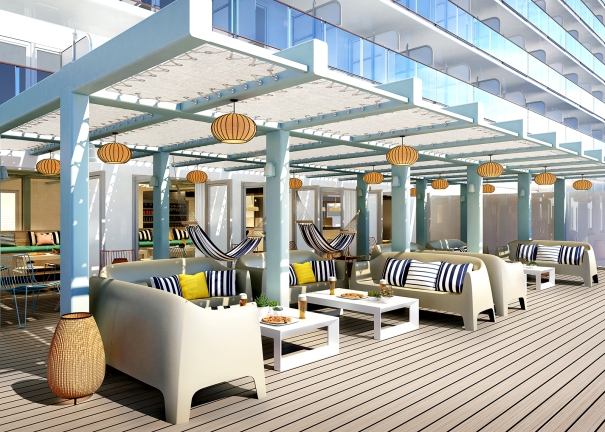 Virgin Voyages has announced the breadth of its onboard eateries, which include an expansive array of restaurants ranging from haute cuisine to casual fare. With a total of 20+ food choices onboard Virgin Voyages’ first ship, Scarlet Lady, the company released new designs for their restaurants, seaside lounges and casual eateries by their Creative Collective, which includes world-renowned designers from Roman and Williams, Tom Dixon, Concrete Amsterdam and Soft Room, amongst others.

Virgin Voyages does not believe in paying more for great food and ditched the traditional up-charges levied when dining in speciality restaurants at sea. Virgin Voyages has designed all eateries on board to offer exceptional made to order eats and opted to include all restaurant food in the voyage fare.

The Virgin Voyages Rebellious Luxe experience is rooted in the modern romance of sailing: a thoroughly new take on the formal grandeur and opulence of the ocean liner heyday when ships were at the forefront of both technology and luxury.

Virgin Voyages will offer sailors a uniquely elevated and boutique Adult-by-Design experience for the 18+ traveler. Virgin Voyages aims to be one of the cleanest fleets at sea, with a ban on single-use plastics for its sailors and no buffet on board the ship, the company will significantly reduce waste and reinvest savings into clean technology and quality products for its sailors. The Scarlet Lady is designed to reflect a yacht’s sleek luxury and will set sail from Port Miami for the 2020 season with 2,770 sailors and 1,160 crew on an unforgettable journey to the Caribbean, she will also be the newest ship sailing to Havana on select voyages.

Virgin Voyages will bring city-like eating to sea and throw out the traditional cruise dining rule book, with no buffet, no main dining room, no forced formal wear, no assigned seating, no assigned dining times and enhanced the choice for sailors to grab a bite by keeping restaurant doors open until well into the night and in some cases the early hours of the morning.

With beautifully designed eateries setting the stage, Virgin Voyages expanded its Creative Collective to include the world class AvroKO Hospitality Group and their very own Michelin starred chef Brad Farmerie, to help curate the company’s food concepts and strategy. AvroKo Hospitality Group’s claims to fame include Saxon + Parole, Genuine Liquorette, Ghost Donkey and the former New York icon Public.
From experimental and haute cuisine to healthy quick bite options, the onboard eateries are tailored for sailors to realize new experiences that are grounded in core values of discovery, transformation, intimate connections and Vitamin Sea – the brand’s approach to well-being for people and the planet – whilst always being never normal.

Sailors can dine at a table or opt to enjoy their meal at the bar, with nearly all restaurants on board featuring a bar. Each restaurant will be helmed by a leading chef who leads their kitchen with passion and artfulness. With a made-to-order philosophy around food, Virgin Voyages pledges to never have to sacrifice quality for a quick bite.

More details on the new lifestyle brand’s experiences will be revealed throughout the coming year.