Save The SS United States

I was approached recently via the CruiseMiss facebook page regarding helping to spread the word about the SS United States and the need for people just like you to help save her.

America’s flagship, the SS United States was a military powerhouse designed as a luxury liner. Larger than the Titanic and at almost a thousand feet long she could quickly and easily be converted to carry 15,000 troops into battle.

She first launched in May 1952 when she spent two days completing her sea trials. On June 7th she was opened to the public for the very first time. June 9-10 saw her complete further sea trials during which she exceed the speed of 34 knots. A highly impressive speed for such a large vessel.

In November 1969 she completed her final transatlantic voyage. To that date she had sailed a total of 2,772,840 nautical miles. Since she has been passed from pillar to post and spent time in numerous foreign countries.

The ship although designed for battle never once seen it. She kept her grace and operated as a luxury liner transporting more than a million passengers including four U.S. presidents, students, immigrants, movie stars and more.

She set the tone for luxury liners, breaking the transatlantic speed record and to this day her record has not been broken.

This once magnificent vessel now sits in a state of disrepair at a Philadelphia pier. Her 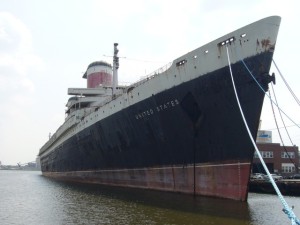 paint fading and peeling, she is only a shadow of what she once was.

This is where you come in. www.savetheunitedstates.org is in desperate need of donations to help try and restore this amazing ship to her former glory.

The campaigns goal is to restore her exterior, bringing back that notion of American pride that she once had. A museum onboard will celebrate American culture, technology and innovation. She will also offer a 50,000 square feet interior space which can be used for hospitality and entertainment purposes.

“Sometimes it can be something as simple as a limestone monument, a Main Street parade or the high notes of a ball park anthem to rekindle a sense of national pride and purpose. Or it can be an awe-inspiring all-American ocean liner that bears a great name that makes people realize how strong we are as a nation and how we must work together to ensure “Made in the USA” means something to all of us again” – Susan Gibbs, executive director of the SS United States Conservancy and granddaughter of William Francis Gibbs, the ship’s designer.