Recently on #CruiseChat the topic of discussion was gratuities. I think this will always be a sensitive subject when it comes to cruising but it was a great opportunity to see other people’s points of view. Those who took part either work within cruise travel or they simply enjoy cruising as a form of holiday. You really did get a nice broad perspective.

Personally I don’t like the automatic system; I want to tip in cash. You create such a bond with the likes of your cabin steward whilst you cruise and its nice come the end of your holiday to say I appreciate all your hard work, thank you very much indeed, and hand them what they have certainly worked hard for. The automatic system removes this, you lose that connection and I really don’t want my tips to be decided for me. I want to make my own decision based on the service I received. I may not want to leave the “suggested” amount; I might decide to leave more or less.

One cruise a few years ago we actually left double the suggested amount for our restaurant waiters and restaurant manager. I am still yet to come across a nicer bunch of waiters onboard. The entire cruise of an evening was simply perfect and often hilarious. When we handed them the envelopes on the second last night you could see the appreciation, they genuinely were thankful for your kind gesture. 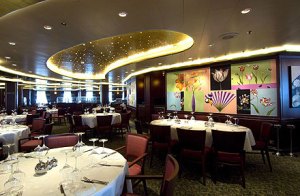 I don’t want to have a tip suggested, then automatically taken for me to then have to mess around either adding more via reception or start working out how I tip the extra in cash to the relevant people……..this to me is just headache! Therefore I stick to what works on a personal level.

I know some people will disagree and say they prefer the suggested amount and they prefer it to just be automatically added, which is fine. There is no right or wrong answer when it comes to tipping it is simply down to your own personal preference. I think that’s why this will forever remain a “touchy” subject.

One thing during the #CruiseChat we did all seem to agree on was that either way you should tip. Finally!!! Everyone was in agreement! Well, to a certain extent 😉

Gratuities and cruising are like two peas in a pod, unless you are sailing around the world in 6 star luxury you will have to address the issue that is tipping. My suggestion would be do what works for you. I always tip, but I do it the way I want too because that works for me.

#CruiseChat is the fastest hour on twitter! Join in at 2pm EST/ 7pm GMT every Tuesday!

9 comments on “Let’s Talk About Gratuities”