I became aware recently that the iconic brass bell from the Costa Concordia had been stolen but not really mentioned it much beyond a post on facebook. I decided to go into it a little more today as to a certain extent I am still baffled and pretty annoyed by the theft.

My initial reaction to this news was how one earth did someone manage to steal it? For a start it weighs 10Kg, that’s not exactly a throw in your backpack kind of weight and it was fixed with heavy duty bolts to the ship’s bridge which I would like to point out is still and was at the time submerged!

How did no-one see any of this? I am assuming it would have been a team of people involved in pulling it off but surely someone must have noticed something? Or maybe anyone that did simply thought they were part of the Italian Coast Guard or Navy.

I suppose my initial reaction to this then led me onto my second concern, which probably should have been my first, but wonder of the situation took over.

Do we need to be more stringent with procedures in this kind of situation? What I mean by this comment is simply the theft of the bell was not just that, it was also a complete disregard and lack of respect to those that lost their lives in this tragedy and an insult to their grieving families. 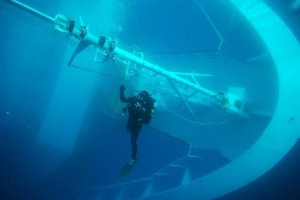 should be something in place to ensure a ship in the kind of state that Concordia is now in, be patrolled to avoid this kind of thing happening. I know people can argue and say well how does that work if the ship was at the bottom of the ocean, like Titanic. Well, ok, in that situation it wouldn’t work but in the Concordia case the families of those lost can still physically see this ship for what it is, a cruise ship, a place filled with fun, exciting travel and amazing memories. It still sits there right in front of them where if they wanted too they could get within feet of her and still be on dry land.

Maybe I am thinking with my heart instead of my head but I am disappointed that a group of people would feel the need to steal something that really did become a symbol of this tragedy. Yes, physically it’s just a brass bell from a ship, but, to someone that maybe lost a loved one in this tragedy it could well have symbolised so much more.

Categories
Recent Posts
My Tweets
Instagram
I took my #HondaPCX to see Azura today. I always feel better once I've had my #cruise ship fix, even if right now it can only be from a distance. Until I can get back onboard (and between rain showers) this bike is keeping me fully on track - my therapy on 2 wheels, for sure!! I've also got a great riding crew and our days out are insanely good! We're like family now and I'm so grateful for them. ❤🚢⚓
I can't go on my usual #cruise adventures right now, but I can go road #cruising. Had a trip down to Whitby yesterday with some local bikers. The furthest I've been in 13 months and it felt great! I'm still so ready to get back to sea though!! ⚓🛵☠😎🏍💃
Follow CruiseMiss Cruise Blog on WordPress.com
RSS Links
Loading Comments...
Comment
×
%d bloggers like this: