I boarded Queen Mary 2 in Southampton on July 17, and we are currently steaming west across the North Atlantic towards New York City – in fact, we are almost there! I can’t begin to tell you how excited I am for our arrival in the Big Apple, but first let me tell you all about this grand ocean liner and what I’ve been doing.

My Britannia Club Balcony Stateroom has been absolutely perfect. I really couldn’t have asked for better accommodation. I have a Queen-sized bed (with several HUGE and very comfortable pillows), a sofa, vanity area, large flat-screen TV and lots of wardrobe space. The bathroom is a reasonable size and features a shower, basin and toilet. The balcony is one of the biggest I have ever had on a ship and you can comfortably recline both chairs and still have room to manoeuvre. I have to say that I’ve fallen in love with the bed and the bedding. On Monday evening I was feeling extremely tired, so I decided to have an early night and within minutes of my head hitting the pillow I was in a deep sleep. I didn’t stir until  the following morning, I’d had roughly 8 hours of uninterrupted sleep and I literally can’t tell you the last time I slept for longer than 4 hours at a time. If only there were a way to get the bed off the ship without anyone noticing! 😉 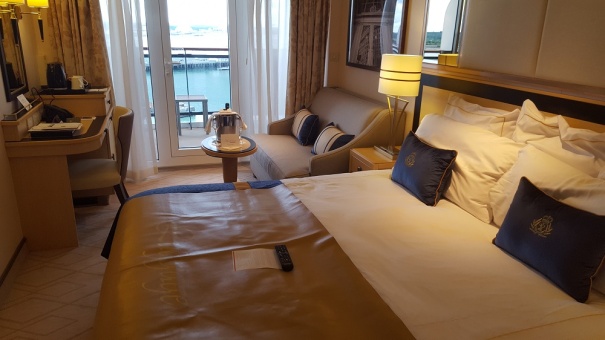 Before I joined Queen Mary 2, I selected first sitting in the Britannia Restaurant via my Voyage Personaliser, and as I’m on my own, I was placed on a table with 5 others whom are also travelling alone. It’s a nice mix of people and dinner with them has been a most pleasant experience. I even went along to the flower arranging class to see what Susan had been making during the hour – her delightful arrangement found its home on our table for dinner during the second formal night. I’ve not experienced fixed dining for quite some time and the change has been nice, we are also incredibly lucky to have a table right in the centre of the restaurant on Deck 2, which means we have marvelous  views all around and up to the level above.

I’ve been really impressed with all of the food selections throughout the voyage. In the Kings Court I’ve had prawn skewers with peanut sauce at lunchtime, delicious link sausages and waffles at breakfast and a rather tasty shrimp salad for dinner. I’ve had lunch in the Golden Lion Pub a few times and that was also very good – I highly recommend the Chicken Tikka Masala and the fish and chips. The Britannia Restaurant has offered some very nice dishes, including delicious scallops from the CanyonRanch menu, Chateaubriand, pumpkin soup, seared sirloin steak and guinea fowl, the latter of which I’d never had before but really enjoyed. I can’t fault the food at all, it really has been superb and better than I had expected. I also want to take this opportunity to say how fantastic our waiters have been in the Britannia Restaurant. A team of young men who clearly take great pride in what they do. 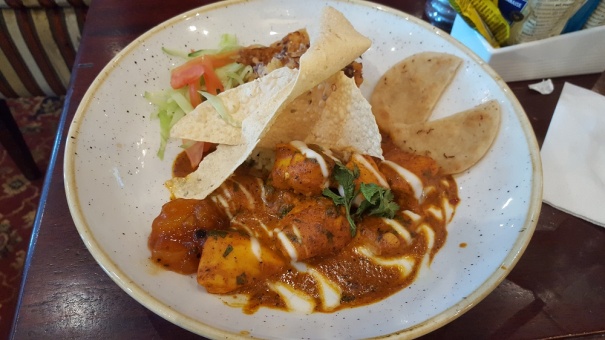 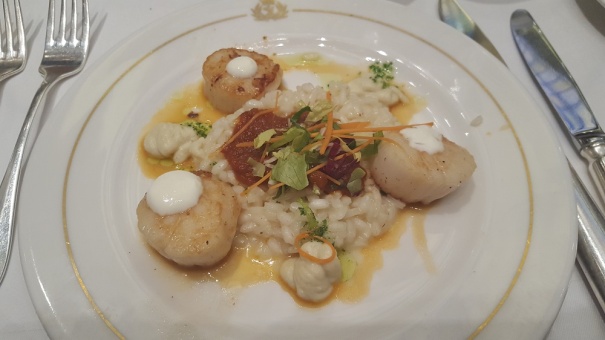 The weather was very kind to us on our first day and then it went south until Friday when once again the sun made a welcome appearance. On day one, I found a seat on one of the aft decks and sat for most of it people watching and reading. Before I left on this trip, I found myself with a new little toy: a Kobo aura H2O. Usually I prefer to read a paper book, but I thought I’d give this new gadget a try – saying as I was limited on packing space – and I absolutely love it. I downloaded a few books before I left – which was incredibly easy to do, including what I am now finding out is a rather exciting ghost story about a family that move to a new house in the Sussex countryside, a house that seems to be cursed and haunted by an elderly lady and young family. I rarely get to read at home, but I can hardly put the Kobo down. It’s incredibly light, offers a full HD screen and, just in case, it’s waterproof! It also features a few built in games and a dictionary. I’ve literally carried it all over the ship and it fits perfect into my small handbag. 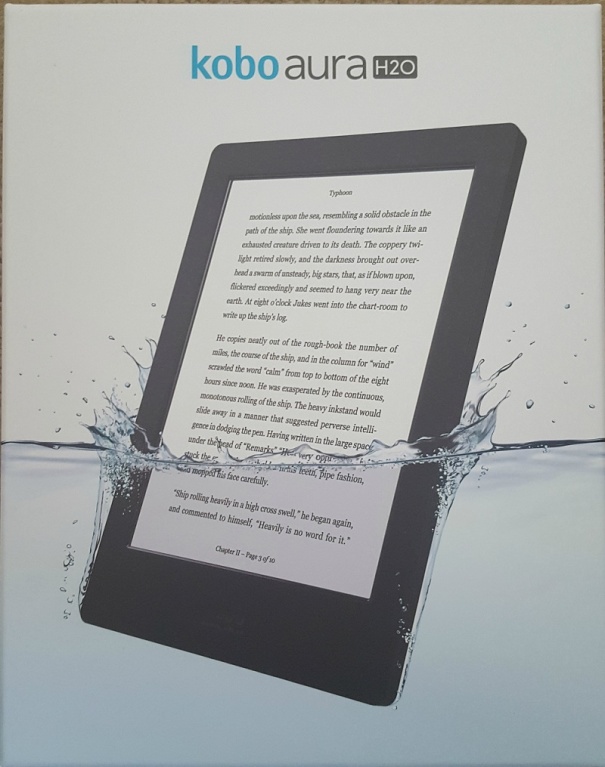 I’ve explored virtually everywhere now, I even went up to Deck 12 to see the dogs. There are 17 of them on this voyage (and 2 cats) and they include a gorgeous 12 year old Golden Retriever named Gatsby. I also had the pleasure of meeting the lovely lady below, her name is Ridley. She has travelled to more than 30 countries and enjoyed voyages aboard Queen Mary 2, several times. She is a beautiful dog and I’m hoping to give her a little spotlight in a future blog post. Watch this space… 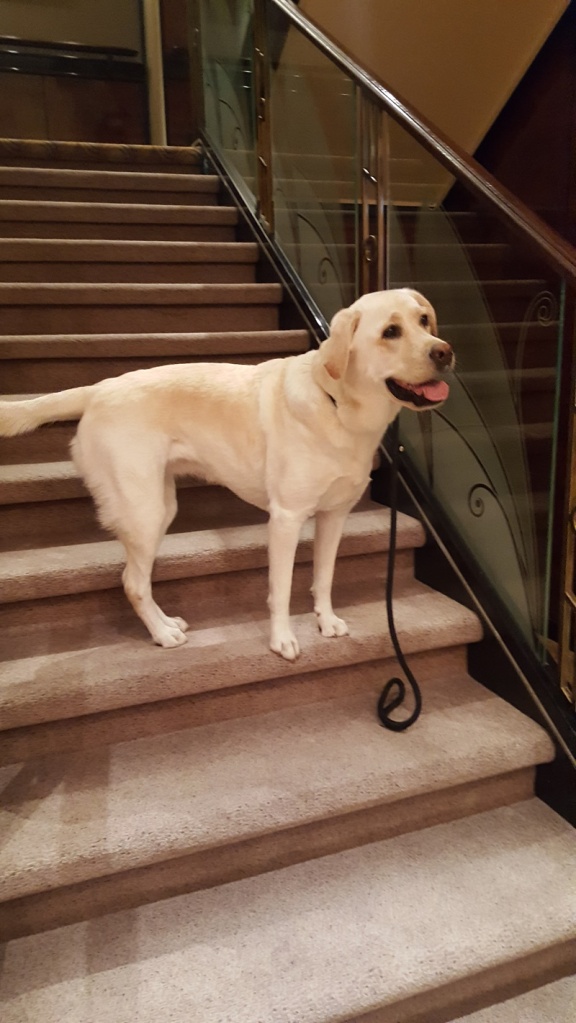 Throughout the crossing I have been going along to the Royal Court Theatre for talks by former Brooklyn Borough President and current Vice President of NYC & Company, Emeritus Marty Markowitz. They have been so much fun and really got me in the mood for my time in NYC. His first talk focussed on Brooklyn and Staten Island, and his second talk was all about the Bronx, Queens and then Manhattan. He highlighted many points of interest – aside from the obvious – and really got your mind ticking over on all of the things that you could potentially see and do in the city. He also mentioned a place called Junior’s, which apparently do the best cheesecake in the world. I’m not a huge cheesecake lover, but he said they also do pretty good red velvet and I would never say no to a good slice of red velvet!

To my surprise, I’ve also managed to get my space fix during the crossing thanks to the onboard planetarium – the only one at sea – and several space related talks from Dr. Chris Crowe. I know pretty much everything these is to know about stars. His talks were fascinating and he really kept you engaged. I find sometimes that speakers can leave you feeling lost and worn out, but he really made it so easy to follow and to learn.

The planetarium was actually one of the venues I was most looking forward to experiencing onboard and it has been absolutely fantastic! The first short movie I watched was called ‘Asteroid-Mission Extreme’  and it was fascinating. It looked at ways in which mankind can prepare for asteroid impacts in the future and how we can possibly even use them to create fuel, which can be used in space to allow crafts to explore further than ever before. It was a great way to spend 25-minutes on a Wednesday afternoon at sea when it was blowing a gale outside. On Thursday, I also went along to watch the new short-movie ‘Cosmic Collisions’ and it was very good, probably my favourite of the two. This movie gave insight into how our moon came to be, and what will happen to some of the galaxies out there in the next few billion years. I have to admit that I’m a little bit in love with the planetarium, It is my new favourite place of any ship! Unique and educational at the same time – I hope they have some new offerings during my eastbound crossing.

Boarding this ship for a voyage to New York has been a dream of mine for a very long time, and I’ll admit that as we sailed from Southampton, I felt quite teary-eyed at the fact that I was finally doing it. It really is a huge privilege to be here and now we are almost in New York, everything is becoming very real. I’ve had the most wonderful time onboard and I’ve met some very interesting people. I’ll be sad to say goodbye to them all, but I’ll also look forward to meeting new people and hearing new stories on my eastbound crossing.

I will be getting up before sunrise tomorrow, to ensure I have enough time to get ready and be on deck before we pass under the Verrazano Bridge, and I am so looking forward to it! I can deal with the tiredness another day! I’m also trying self disembarkation for the first time, so I’ll let you know how that goes, in a future post.

I’ve got so much more to tell you, there are lots of future blog posts to come – that’s how fantastic this ship is!
When I leave Queen Mary 2 in Brooklyn I will be doing a 16-day east coast road trip with a friend of mine before boarding QM2 for the eastbound crossing back to Southampton on August 9, so I will check back in with you all as soon as I can. You can follow my day-to-day adventures, however, via Facebook, Instagram and Twitter.