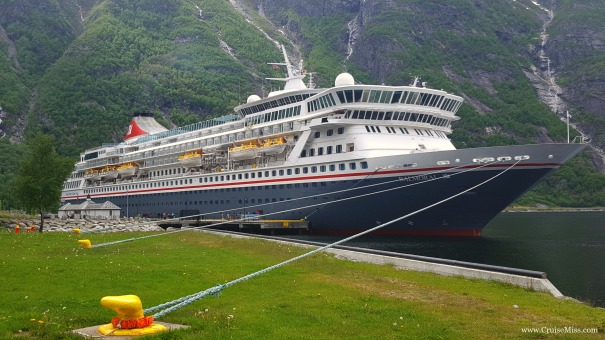 Fred. Olsen Cruise Lines’ Balmoral sailed into Newcastle with the promise of a 5-night scenic cruising voyage to Norway, taking in 2 ports of call: Bergen and Eidfjord. I visited Norway a few years ago on a cruise; that particular itinerary was to the Arctic Circle and as you can imagine, it was rather cold! This cruise, however, would bring stunning scenery, warm days, superb food and a ship that has so much charm and character that I was reluctant to disembark in Port of Tyne, but let’s not get ahead of ourselves… I’ve not told you anything about the trip yet!

It was a wet and miserable day, but Balmoral was warm and inviting and I was desperate to get aboard. Check-in was swift and I was soon in my cabin, unpacking. I had a balcony cabin on Deck 6 and it was a lot bigger than I had expected- I was rather pleased, I have to say. Not only was there enough wardrobe storage, the cabin was also wide enough to allow me to keep my suitcase open on the floor without it being an obstruction – it was a 5-night cruise, I wasn’t going to unpack completely! My cabin also had the best air conditioning of any ship I have ever been on! I turned it down and it was instantly cold, I turned it up and it was instantly hot. I whinge and moan about one thing on every cruise and that’s the air con in the cabin, but this time I was a very happy cruiser. I hate nothing more than being too hot when I am trying to sleep, but Balmoral kept me nicely chilled.

Balmoral is traditional in many ways and that’s one of the things I love about the Fred. Olsen fleet as a whole. I can sit on the open deck and see the sea – it may sound ridiculous, but you don’t get that from a lot of cruise ships these days because they are bursting with this, that and everything in between. I spent every evening on Balmoral outside watching the world go by and I was in my absolute element. That is my happy place and the place where I can think, collect together my ideas and just enjoy being at one with the world. There’s nothing more peaceful than watching the sun set across the open ocean – or in this case, in a stunning Fjord where snow-capped mountains tower above you and remind you just how small you are in the world. 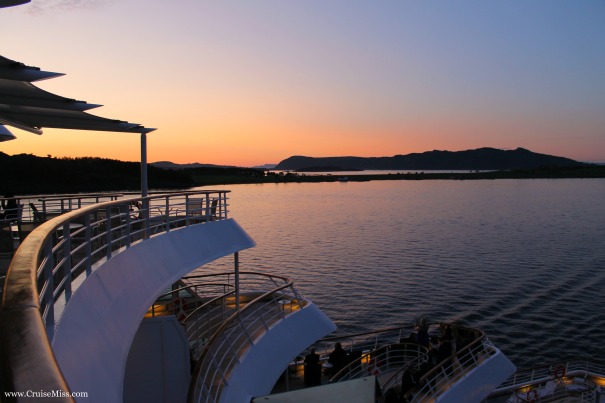 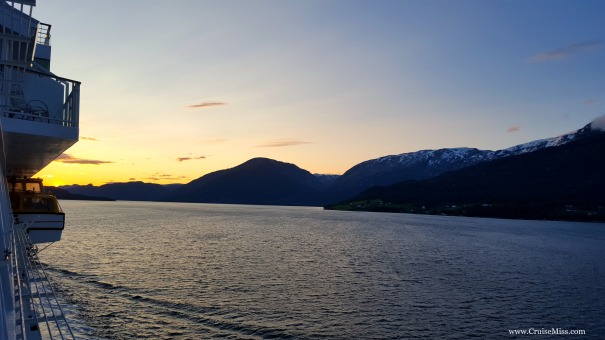 My main dining venue during the cruise was The Spey restaurant on Deck 10 and what superb views it offered! We were very lucky that our table was right at the back of the restaurant, set against the glass doors, so we almost had panoramic views. I’m jumping ahead a little now, but on the evening we left Eidfjord the views were absolutely beautiful. I have NEVER been in such awe of my surroundings as I was that night. The huge round windows in the restaurant became moving picture frames and it was just incredible. My pictures will never do it true justice, you really had to see it for yourself, but I’ve added a few below for you to see – yes, I managed to sneak outside so that my pictures weren’t taken through glass. 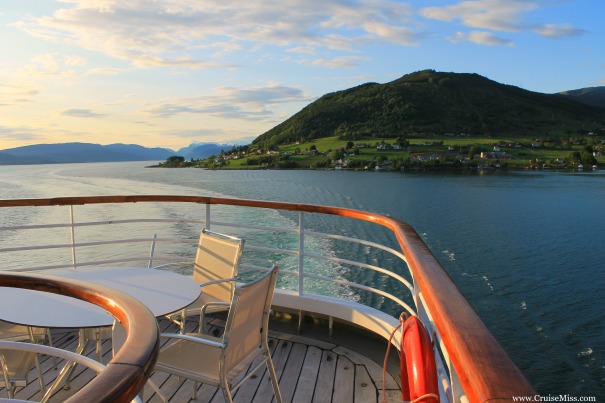 Our first port of call was Bergen and I was quite excited to head ashore and explore. I’d missed out on the port during a previous cruise thanks to Mother Nature throwing an almighty tantrum, but this time I made it, and off up Mount Fløyen I went. I was incredibly lucky as the day had started off quite damp and overcast, but by the time our coach arrived at the ticket office, the sun was out and the clouds had lifted considerably. Our group boarded the funicular and started the ascent. The views from the top were nothing short of breath-taking – as you’d expect at 1,000ft above sea level! I’m not good with heights and I was a little nervous on the train on the way up, but once at the top, I was transfixed with the scenery. We only had 30 minutes at the top of the mountain and ideally I would have liked longer to explore more and simply take my time, but by the time we left it was very busy! Our guide really did make the right call by going there first. Once back on the coach we had a drive around the city before heading back to the ship. I was going to go back out after lunch, but once again the clouds rolled in and it started raining quite hard, so I stayed in the dry and warmth of Balmoral – taking part in the afternoon quiz and getting a respectable 13 out of 20! I would definitely recommend a visit to Mount Fløyen if you are ever in Bergen, but ideally you should get there as soon as it opens and possibly do it on your own as opposed to an organised excursion. I’m told there are some beautiful walks you can do through woodland and past lakes, so if you like the outdoors then this is definitely ideal for you.

Our second port of call was Eidfjord and I’d not planned anything here, I just wanted to walk around and enjoy this very small Norwegian town. Before leaving the ship, I went out on deck to get a birds-eye view of where we were and I felt as if I were docked right in the middle of a toy town – that’s the only way I can describe Eidfjord. A very beautiful toy town. Mountains with waterfalls towered above us, it really was a spectacle. If it had been a warm day, I would have spent our time there just sitting on the grass next to the ship. It’s a place you could probably sit for hours and not be bored because every direction you turn you are greeted with something so incredibly beautiful. If you would prefer to do something more adventurous, then one attraction here is kayaking; A few people onboard went out on that excursion and said they absolutely loved it – so there’s an idea for you. 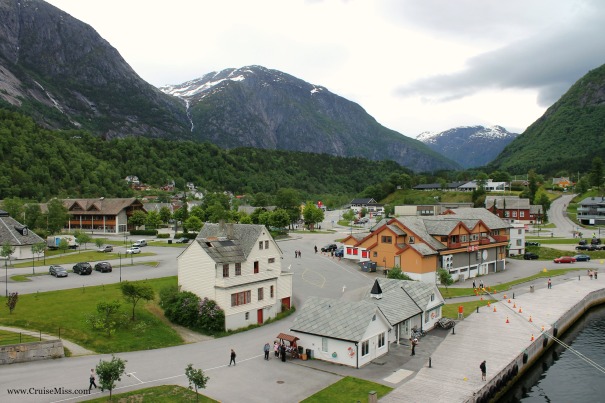 The food onboard Balmoral was delicious! Every evening the menu was exciting and there was always good variation between dishes. I ordered a pasta dish on my first evening aboard which was incredibly tasty, I do love pasta in a white sauce and aside from it making my taste buds happy, it was visually very pleasing. I had steak twice during the cruise – both were cooked exactly to my liking – and I had soup at just about every other opportunity. If there’s one thing you can’t go wrong with on Fred. Olsen it’s the soup!! 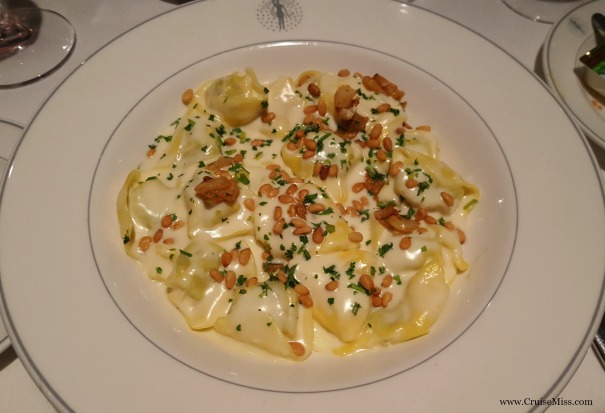 On my final evening aboard I dined at The Grill, Fred. Olsen’s specialty restaurant, which on Balmoral is located at the back of The Palms restaurant (when not warm enough to enjoy al fresco). It is £20pp to dine at The Grill, but it is definitely worth every penny. The menu is quite small, but for steak and seafood fans it’s more than enough. There are 4 starters to choose from, including lobster pasta (which was delightful) and beef carpaccio. As an entrée you can choose either an 8oz fillet (this was my choice), sirloin or rib-eye, or if seafood is your thing then the only choice you need to make is the grilled mixed seafood. Each main meal comes with your choice of 2 side dishes, including thick cut chips, grilled asparagus, garlic mushrooms and salad. If you still have room left after all of that, then I highly recommend the chocolate and orange Bavarian cream tart to finish.

Overall, the cruise was absolutely fantastic. It felt much longer than 5-nights and I would do it again in a heartbeat. The scenic aspect of the trip – which was a big selling point – didn’t disappoint, we were presented with some splendid sights, including the Furebergfoss Waterfall, which was magnificent. The water was thundering down the side of the fjord and there we were, on this huge ship, just sitting in front of it. Every day, there was something to see, even if it was just an oil platform in the North Sea, there was something to look at. Once we left the North Sea and got into the Fjords, it really was stunning. Several times, we simply just stopped in the middle of a Fjord and sat there for a while before doing a 360 degree turn and heading back out the way we came in.

Norway is such a beautiful country and no matter what time of year you visit, it offers captivating views and scenery. I’ve seen the country in 10 foot of snow and I’ve seen it in glorious, warm sunshine and both were equally impressive. The only criticism I have is that 5-nights with Fred. Olsen simply wasn’t long enough for me! 😉