Quantum of the Seas To Home Port In Shanghai 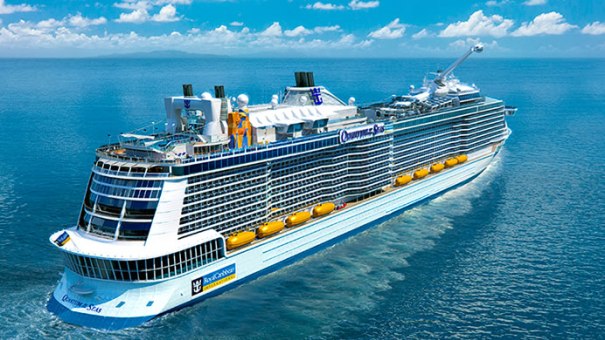 Royal Caribbean International has announced that its newest ship, Quantum of the Seas, will make its home port in Shanghai (Baoshan), China, bringing the company’s most innovative ship to the world’s fastest-growing cruise market. The ship will reposition to China in May 2015, following her inaugural winter season sailing out of New York Harbor to the Caribbean. In China, Quantum of the Seas will join Mariner of the Seas and Voyager of the Seas in Asia.

“These incredible ships will meet the sophisticated expectations of consumers in Shanghai, New York and London. Our mantra for the new Quantum class of ships is ‘this changes everything’ – and upping our game in these key markets achieves just that,” said Dominic Paul, Vice President, International, Royal Caribbean International. “Our distinctive style of high quality innovative cruises has become known to travellers around the world and we will continue to deploy our most technologically advanced ships where the demand is, with the expectation of winning new converts to cruising.”

“Consumers in China have grown to expect the best the world has to offer, and Quantum of the Seas meets that standard like no other ship,” added Adam Goldstein, President and COO, Royal Caribbean Cruises Ltd. “We are ready to accelerate the growth of this vital market with a ship that will capture the imagination of travellers looking for a one-of-a-kind holiday experience.”

Goldstein said the company was able to make the move because its new-ship pipeline will keep the New York region supplied with top-rate ships as well.

“We are very mindful of the importance of New York, which is why we are bringing Liberty of the Seas and then Anthem of the Seas to this market.”

Quantum of the Seas will debut in November 2014, and will spend its inaugural season sailing from Cape Liberty in Bayonne, N.J., before repositioning to China in May 2015. Beginning late June 2015, the ship will sail three- to eight-night itineraries year-round from Shanghai to Japan and Korea. Liberty of the Seas will then arrive to Cape Liberty to sail to Bermuda, the Caribbean, and Canada and New England for the 2015 summer and autumn seasons. The Freedom-class ship will be the company’s newest and largest ship to offer cruises to Bermuda from the New York-metropolitan area.  Finally, Quantum of the Seas’ sister ship, Anthem of the Seas, which launches in April 2015, will complete her inaugural Europe season from London (Southampton), U.K., before arriving to Cape Liberty in November 2015 to continue Quantum-class cruising to the Bahamas and Caribbean for the winter 2015-16 season.

The groundbreaking Quantum-class ships, Quantum of the Seas and Anthem of the Seas, will debut a new set of first-at-sea onboard experiences, such as Ripcord by iFLY, a heart-pounding skydiving experience; North Star, a thrilling adventure that transports guests more than 300 feet in the air on a breathtaking journey; cutting-edge transformative venues including SeaPlex, the largest indoor sports and entertainment complex at sea with bumper cars, roller skating and more; and the cruise line’s largest and most advanced staterooms ever.  Guests also will enjoy the new Quantum-class “Dynamic Dining,” a completely new culinary experience that offers a landscape of 18 restaurant concepts as vast and varied as dining in the world’s most cosmopolitan cities, including specialty restaurants created with partner-chefs Jamie Oliver, Devin Alexander and Michael Schwartz.