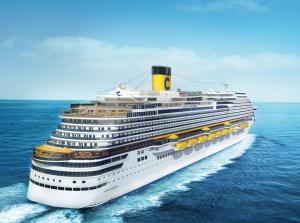 Costa Cruises has revealed the inaugural cruises for Costa Diadema, the fleet’s future flagship which will be delivered by Fincantieri on 30 October 2014.

The first cruise departing on 1 November will be the vernissage cruise, with three new culturally rich and architecturally beautiful cities included in the itinerary: Trieste, Dubrovnik and Genoa.

The cruise will depart from Trieste with a one and a half day stopover, while the final port of destination is Genoa, the city ​​where Costa Cruises has its headquarters. The ship will also make daily calls from 3 November at Dubrovnik, Corfu, Malta and Naples before terminating in Genoa on 7 November.

On 8 November, Costa Diadema will depart for three seven-day inaugural cruises in the western Mediterranean Sea with longer stopovers at Marseille, Barcelona and Savona. The cruises will offer the chance to visit both Florence and Naples, two of Italy’s most popular cities, in a single cruise. The itinerary includes calls at Genoa (only for the first cruise), Marseille, Barcelona, ​​Palma de Mallorca, Naples, La Spezia and Savona. During these first weeks of service, Costa Diadema will visit five Italian ports: Trieste, Naples, Genoa, La Spezia and Savona.

From 29 November and for the rest of the 2014/15 winter season, the new flagship will leave from Savona on seven-day cruises in the western Mediterranean Sea, calling every week at Marseille, Barcelona, ​​Palma de Mallorca, Naples and La Spezia. 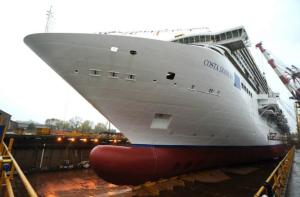 Marghera. The project is employing a total of approximately 1,000 shipyard workers plus another 2,500 employees of allied industries. The benefits in terms of employment extend beyond the yard, especially regarding the fitting-out of the interiors of the cruise ship, with the involvement of around 400 contracted suppliers, most of which are Italian firms.

Costa Diadema (132,500 gross tonnage and 1,862 guest cabins) will offer comfort combined with top quality food, wine and entertainment. The new flagship’s interiors will be even cosier, more spacious and more modern in terms of facilities and the layout of public areas. Costa Diadema will offer large, split-level rooms directly overlooking the sea and conveniently interconnected, thus evoking the atmosphere of a buzzing seaside resort.

Among the many innovations on board are new food and wine tasting treats in the shape of the Vinoteca (wine house), Birreria (beer house), Japanese Teppanyaki, Pizzeria and Gelateria. There will also be new forms of fun and entertainment on board with the Country Rock Club, the place to go to hear legendary ‘Classic Rock’ music, and the Star Laser room featuring different styles of interactive laser games including the Laser Maze, for guests to have fun with their friends.

Shopaholics will love the Portobello Market Piazza, the heart of a 1,100m2 area consisting of designer stores and retail outlets, while the purpose-built Samsara Spa located on the upper decks will offer guests the chance to enjoy the regenerating experience of a wellness cruise. For those wanting to enjoy the sun, sea and spectacular ocean vistas, the open-air promenade with cabanas is ideal and extends over 500m.