The time has come to once again go over the topic of cruise ship manners. Sometimes our fellow passengers frustrate us, I have blogged about it before. You always come across at least one person at some point that leaves you wishing there was an ejector button, or in the case of a cruise ship, a hole in the deck that would swallow up that particular passenger and then torpedo them out the back of the ship! Oh, did I say that out loud? 😉

One thing that really irritated a friend I met onboard MSC Opera was that although there was the language mix, you often found yourself holding the door open for someone and received not even so much as a smile in return. His said to me in conversation “I don’t care if we don’t speak the same language, just say something, anything, to acknowledge that I done something for you”. I think he had a fair point to be honest. Even eye contact and a nod would have done. It’s just basic manners.

I tried getting out of the lift one day to find an elderly woman and her husband more or less force me back in. The lift is not going to run away from you, just please relax and let people out first. I have noticed on MSC ships that although the lifts are quite large the actual space between the doors is fairly small and because the lady had a walking stick I physically could not get out without forcing my way past her, something I was not going to do. I couldn’t be bothered to force my way through everyone else either by the time they did get in, so I stayed in the lift and went a few decks down to then come back up. I stood silent as a mouse, did not utter a word or sigh. I think I deserve a medal for that! 😉

The best thing I have ever seen (and yes I am being sarcastic) happened at the pizza station. I still can’t believe it! There was a Margherita 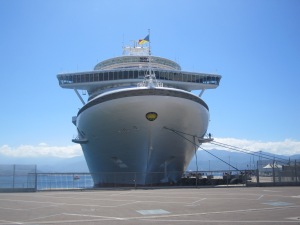 pizza freshly served and maybe 6 or 7 people waiting for a slice. As everyone grabbed what they wanted it came down to a lady waiting and behind her a young boy, he was maybe 9 at the most. The woman knew he was waiting, picked up the pizza slice and went on to take the last 3 slices, leaving the little boy with nothing! How could you do that? I can still see the disappointment on his face as he went up for his turn to find nothing left but the tray. Yes another one was out within maybe 4 minutes at the very most, but that’s not the point. She could have left one slice for the kid! I thought to myself, OK don’t judge, maybe she has children too and that’s who the pizza is for, but no. I passed her in the buffet and there she was enjoying all three slices herself. I still feel sorry for the kid!

The things that get to me are fairly trivial in the grand scheme of things, but I do just wish people would have a little more thought for others. Especially when there is food involved! Some people seem to go all cave man (or woman) when there’s only FIVE pieces of meat left at the buffet station, because obviously there’s no more on the entire ship, that’s it! Once it’s gone it’s gone, you will have to starve for the rest of your cruise! OK I shall stop sassing and be quiet, but I know many of you will be nodding in agreement.