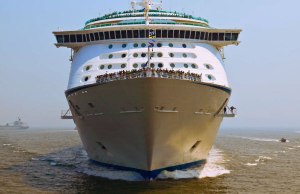 There’s nothing better than a cruise convert but the best cruise converts are the ones who spend the entire duration of their first cruise expressing to you daily their displeasure at their chosen holiday, only to inform you several months after you returned home that they have gone and booked another one! I really do love these people!

It’s as though they want to force themselves not to like it, they had pre-conceived thoughts about what the cruise would be like before they boarded and now onboard and enjoying it they have to make themselves hate it.

It’s the usual verbal rampage of I don’t see what’s so great about it, it’s boring, there’s nothing to do, I feel sick, the food is bland…blah blah and blah! They go on and on about how bad it is when secretly they love every second of it.

In fact this kind of cruise convert from a staff point of view can be a nightmare, you could line the walls of their cabin in gold and they would still pick fault.

Occasionally though these people slip up, especially after a visit to the bar 😉 you just watch

them, they will soften their tone slightly and without even realising they are doing it they will compliment some aspect of their cruise. It may only be something small like “this drink is really refreshing” but this my friend, is the beginning of the end.

I assure you people like this exist! I came across one not too long ago. Spent most of the cruise complaining they had taken 3 weeks off work and wished they had not bothered, that it was a waste of a year’s worth of holiday time (you know who you are) Only to send me a message 3 weeks ago asking if I had any suggestions as he was now looking to book a cruise with his girlfriend instead of going with his family again…….need I say more?!

Any cruise convert however in my book is a great individual, yet another person I can look forward to bumping into onboard at a later date. When we can reminisce on how much they secretly loved their first cruising experience.