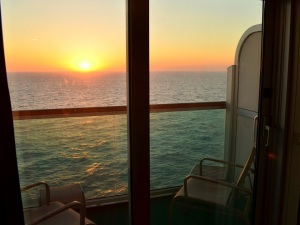 By morning the sea and wind had abated somewhat but the day started grey with drizzle in the air. A final breakfast in the Waterside would also be our discovery that fresh omelette’s were available along with pancakes and other goodies. Oh well, something to be tried another time maybe!

A leisurely morning ensued and then a visit to the photo gallery to see if we looked presentable in any of the many formal pictures taken the night before. Much to our surprise, and to the compliments of the photographers who managed the impossible task, there were several and we spent quite a while debating which ones were worthy of the reasonable £16.95 price tags.

With not much going on and the sun yet to make an appearance up on deck, we decided to 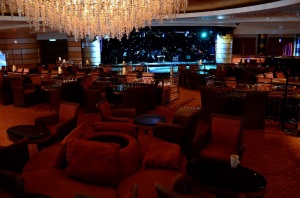 take root in the Tamarind and watch the talk by an ex-RNLI lifeboat man, which turned out to be quite interesting and very popular. Straight after was a talk by one of the entertainment staff on P&O’s 175 year history. It was very informative and included archive video clips and pictures bringing the story to life and it was most enjoyable seeing all the glamorous old ships of days gone by.

After the talk it was time for an afternoon snack and a bit of fresh air. We finally decided to try the fish goujons at Frankie’s that we’d been tempted by all cruise and were pleasantly surprised that they were freshly cooked and most tasty. As the sun was now burning through and there was finally some warmth in the air, we decided to have a good old 99 cone out on deck. A very nice little treat!

With unbroken wall to wall sunshine now engulfing the ship and a calm sea easing our passage, we headed back to the cabin and enjoyed some late afternoon sunbathing on the balcony. 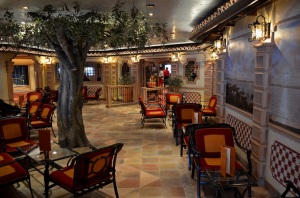 Having already had a late afternoon snack, we decided to head down to Ramblas for the evening as I wanted to give some tapas a try. At £2.50 for 3 starter plates or £5 for a 3 course meal, it was good value and despite my wife not wanting any, it was possible for her to sit with me and just enjoy a drink whilst I ate as the charge was for the food and not per head as in the other speciality restaurants. The food was very tasty and Ramblas was a pleasant and relaxing place.  It’s such a shame that Ventura is apparently losing this area when she goes in for refit next year.

The final theatre show was a repeat performance. It seems that P&O get their money’s worth out of their guest entertainers who sometimes stay on for whole cruises or even multiple cruises back to back and do a number of shows. It certainly wasn’t a bad thing, especially when the repeat was another brilliant performance by the excellent Freddie Mercury tribute. He’d promised a different set of songs and a completely different show. He delivered completely with another absolutely superb performance which was a big highlight of the cruise. Hit after hit were reeled off effortlessly with more comedy moments in his delivery too, making for a thoroughly entertaining evening. Once again, Ventura’s resident band, The Electrix, were simply brilliant and probably even better on this occasion having by then performed 3 times with Steve. Tumultuous applause rained out at the end with a standing ovation from the vast majority of the overflowing theatre crowd. 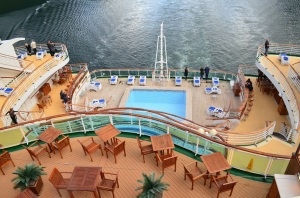 a great end to the cruise. The cruise had given us some treasured memories of the stunning fjords; some occasional peaceful relaxation; lots of rain and a new perspective on cruising with a different line and ship.

The overriding P&O experience for us was unfortunately a bit mixed. We’d had apparently un-typically bad service and for our fussy tastes, average food. The ship had grown on us and, with a few more days to try a few more things, we probably would have grown to like her even more. We loved her size and having eventually got used to her layout, I quite liked it. I knew I’d like the full wrap around promenade deck and I wasn’t disappointed. It was my favourite place on-board and I enjoyed the many laps I completed of it, looking out at an uninterrupted, stunning and ever changing seascape. 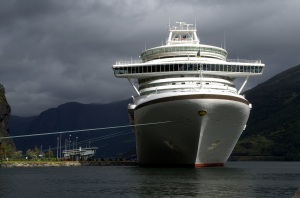 The lack of features from my favourite ship and line, such as ice rink, climbing wall, mini golf and surf simulator didn’t cause a problem at all; instead we just embraced the fact that this cruise, for us, was more about kicking back, relaxing, taking it easy and enjoying the scenery.

We’d certainly had a few negative experiences on this our first P&O cruise and a lot of bad luck with the weather, but it was still great enjoying life at sea on a big ship. We’d found plenty to like about Ventura too, or “The Big V” as she’ll affectionately be known by us. And regardless of the negatives, in my opinion any cruise is a good cruise!