Like the first two days we were once again back at sea for another 2 days before our next port of call which would be Corfu. This would also be the start of 4 port days in a row and soaring temperatures.

The weather now was absolutely perfect. Early morning “rise and shine” in order to find yourself a sun bed, one that would ultimately become your home for most of the next 2 days. Time to start changing from a pasty white to a sun kissed bronze, when I could bear to sit in it that is. I still don’t know how some people manage to sunbathe all day in temperatures exceeding 90 degrees and with no breeze. I can’t stand it; I like the hot weather but not quite that hot and with no air.

Our second night would also be when we met Alfred and Mildred, not their real names of

course but that is what they were named by my friend. Obviously 2 racing pigeons that had exhausted themselves and decided they would hitch a ride on the ship. My friend had me laughing so hard, pretending to be each bird and having a full scale conversation with herself. Maybe you had to have been there but I just about fell off my stool I can’t remember everything she said but one snippet was along the lines of the following and in a strong South London accent.

Mildred: Oi, Alfred, what’s this bloody P&O Cruises all about then? Nothing special if you ask me, it’s just a ship! And where’s the food?!  Oi, Alfred, you listening to me or what? Don’t make me come over there!

Alfred: Yes Mildred love, I am listening to you but I quite like it. Let’s see, it was free, we have been provided with refreshments and I can poop right where I stand. What more you could wish for?!

As I said, maybe you had to have been there but at the time it was hilarious.

Another thing I had noticed were the interesting changes to some of the menus for the main dining restaurant. Like the image you see to the left, gone was the standard white cover with the restaurant name inked upon it and instead it was a colourful scene from years past; it was P&O once again embracing their history and heritage and how better to do it than with food.

This particular menu was delicious. One of the starter options was Chicken, Chorizo and Parma Ham Terrine with Dried Apricot Chutney and Melba Toast’s. One of the soup options, Chicken Consomme Monte Carlo with Truffle, Pancake and Diced Vegetables but, the Pièce de résistance, that was the main meal I picked that night. Spiced Garlic Tiger Praws with Basmati Rice, Egg and Vegetable Stir-Fry and Sweet Chilli Sauce. Quite possibly the nicest thing I have ever tasted in my life. To follow, Eton Mess with Red Fruits and Hazelnut Meringue then a selection of Cheese and Crackers and Tea or Coffee.

I am not a lover of food which is too hot in spice, I like my food to sit comfortably on my taste buds not burn them off but this dish was perfection it really was. I developed quite a need for Tiger Prawns during this cruise if I am honest. Never one to be fond of them in 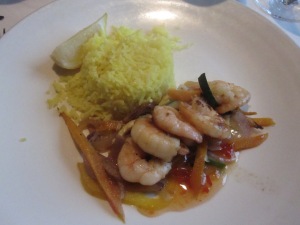 the past I could not get enough of them during my holiday. The image to the right is the Tiger Prawn dish. If you cruise with P&O and it should appear on the menu then definitely give it a try. It was something usually I would never go for as I can be quite a picky eater and anything with the word Chilli in it I tend to avoid at all costs but, I was extremely pleased that I decided to try it.

After a few more hours soaking up copiuos amounts of sun it was time for it to set and for us to prepare for our call in Corfu, Greece………….

Categories
Recent Posts
My Tweets
Instagram
I live for these moments and I miss them so much when I'm not at sea. ❤️🚢⚓️🤗🥰
#villefranche is one of my favourite ports to visit in #France. I first went there in 2008 and visited again just a week ago, and it's still as beautiful now as it was then! ⚓️🚢❤️🇫🇷
Follow CruiseMiss Cruise Blog on WordPress.com
RSS Links
Loading Comments...
%d bloggers like this: