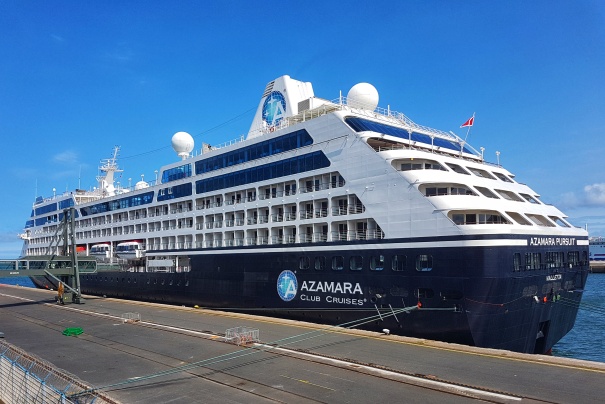 I’d been looking forward to immersing myself in the country club-style experience that Azamara Club Cruises is renowned for and my time to board finally came last week, when the line’s newest ship, Azamara Pursuit, arrived in Southampton. I was impressed from the moment I stepped on board. The décor was beautiful, and she instantly made you feel like you were somewhere very special. I remember turning to my friend and saying, “this is absolutely gorgeous, I can’t wait for the next few days, we are so lucky to be here”. I was completely at the beck and call of this stunning vessel. 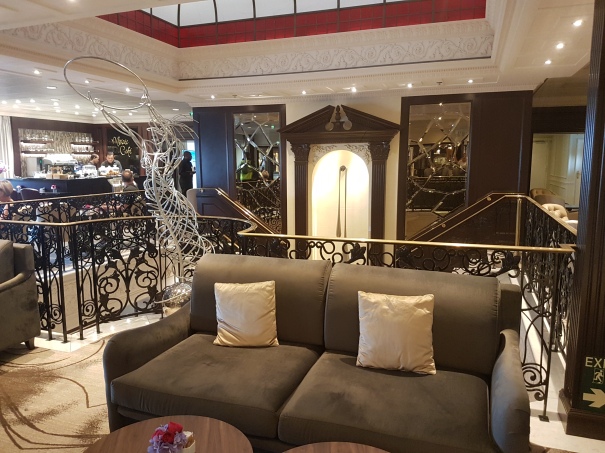 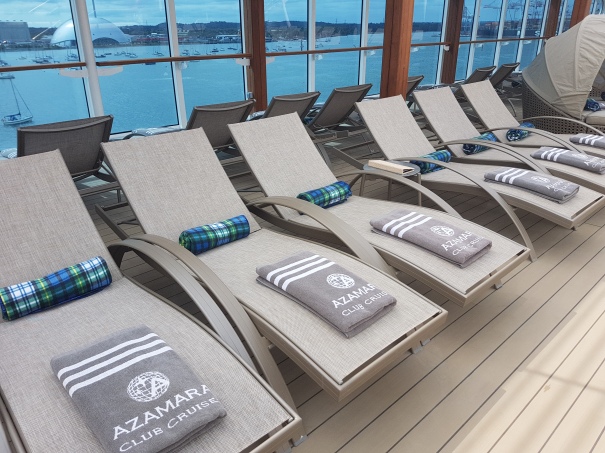 My first stop was lunch and as one always does when a buffet is offered, I grabbed a bit of everything. I’m not a huge fan of salmon, but it looked and smelled so nice that I decided to take a small piece to try. I also had a spoonful of Dauphinoise potatoes, a sample size serving of Pad Thai and for good measure, a slice of pizza. It was all very tasty, but the salmon was surprisingly good, I may have been converted.

The Naming Ceremony was to begin at 5PM, so I found my cabin, unpacked, attended the muster drill and then prepared myself for the evening. I had a twin balcony cabin on Deck 7 which was welcoming and spacious enough for 2 people. The bathroom offered what you would expect and as with the public areas, everything was finished to an exceptionally high standard. The bed was very comfortable, and the linen was incredibly soft. The TV was larger than your average cabin television and there were USB points available for use by each bed. The balcony featured a table and two chairs. 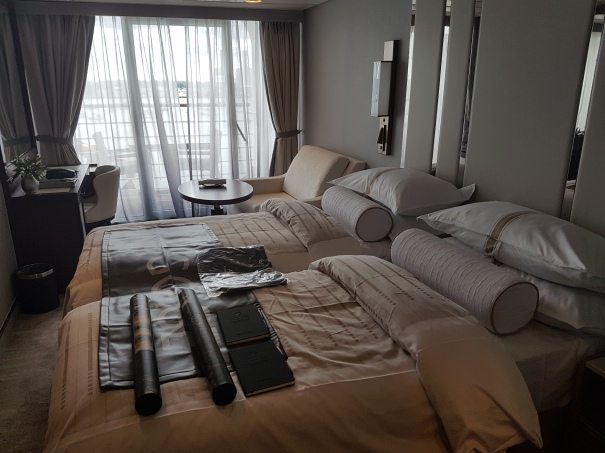 I took my seat at the back of the Cabaret Lounge and soon the ceremony began. There were appearances and short talks from Richard D Fain (Chairman and CEO Royal Caribbean Cruises Ltd) and Larry Pimentel (President & CEO Azamara Club Cruises). A superb show from the Reading Scottish Pipe Band followed and then, before Azamara Pursuit’s godmothers officially named her, blessings from Reverend Canon Andrew David Gibson Wright and Rabbi Maurice Michaels. As we neared the end of the ceremony, Lucy Huxley and Ellen Asmodeo-Giglio both stepped forward and officially named the ship. We all jumped from the thud as the bottles hit the hull and exploded, and then the entire room celebrated. It was such a huge privilege to be there. *The below images of the ceremony are credited to Azamara Club Cruises and the video of the ceremony can be viewed on YouTube. 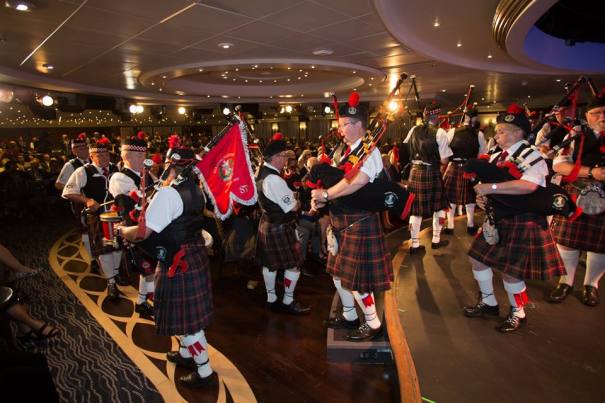 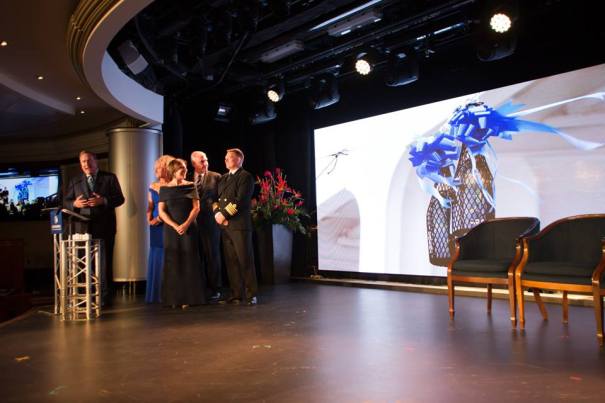 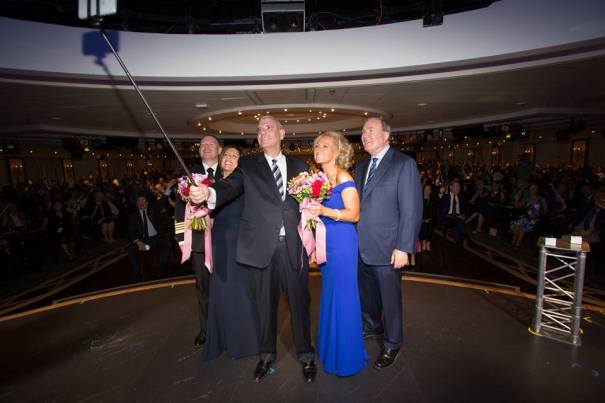 Dinner that evening was served in the Discoveries Restaurant where the menu choice was impressive and substantial. I’d never seen so many offerings on a main dining room menu before, but I wasn’t complaining. I enjoyed everything I ordered, you could taste the quality of the ingredients in every mouthful and although my steak was not cooked as per my request, I still devoured it. I had a jumbo shrimp cocktail, mozzarella, tomato and spinach salad with garlic balsamic and then a New York Strip. I had no room for dessert. 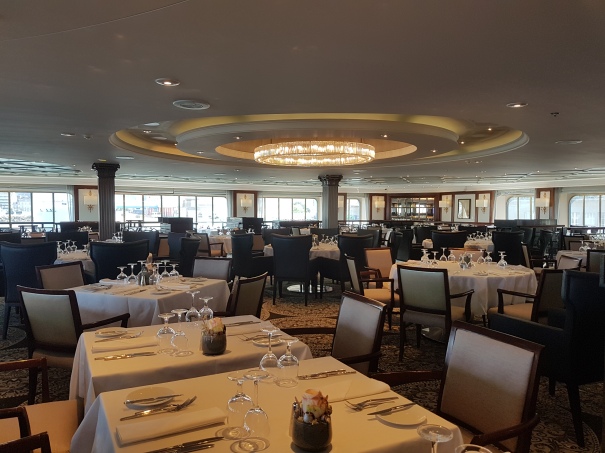 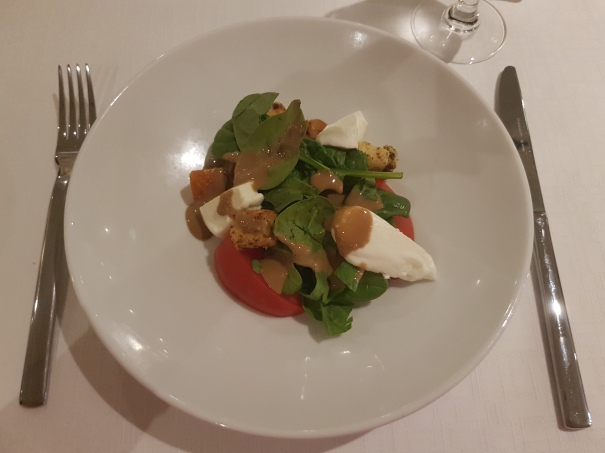 I spent the rest of the evening socialising and experiencing more of the Azamara Club Cruises hospitality that I’d heard so much about. I ended my day in the Living Room, which is located right at the front of the ship on Deck 10. It’s a comfortable space to enjoy during the day and in the evening, it comes to life thanks to a live DJ. It was a lot of fun and very busy, many others had clearly had the same idea.

Azamara Pursuit was already alongside in Cherbourg by the time I greeted the world the following morning. I took the time to explore the ship a little more before choosing The Patio as my lunch dining option. During the day, this poolside grill serves everything from nachos to hot dogs, but in the evening, it is transformed into something more luxurious and is a great place to dine al-fresco. It was relatively busy, but I didn’t wait long for my order: a quality hot dog and crispy onion rings. 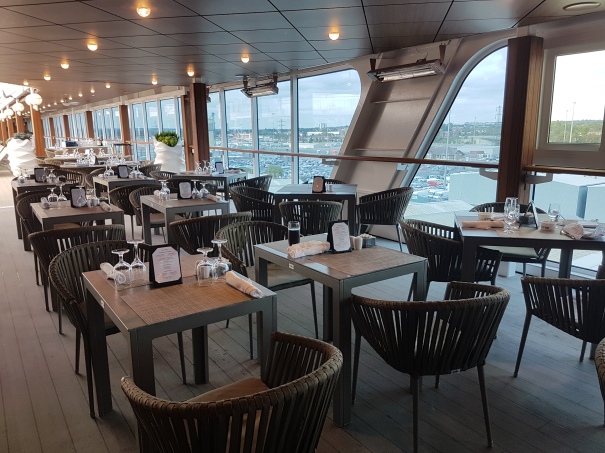 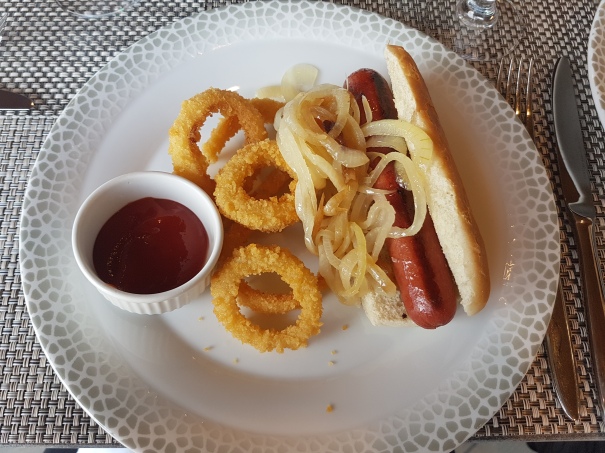 A stroll into Cherbourg killed some time before the AzAmazing Afternoon began and I was oblivious to what I was about to experience. Azamara’s AzAamazing Events are designed to bring local life, well, alive! They allow everyone on board to forge unique connections with the cuisine, culture and real-life character of a destination, and our experience in Cherbourg would be no different. A local French market had been set up exclusively for Azamara Pursuit guests in the baggage hall of the old Transatlantic Terminal Building and it truly was AzAmazing! I was speechless. The market ran the full length of the hall and there were vendors offering all sorts of treats, including fresh flowers, French wines, butter and chocolate laden pastries that were out of this world, and a variety of local cheeses and mouth-watering macarons. It took me a moment to realise, but everything we were looking at was complimentary – even the flowers! I could have stayed there all afternoon and eaten everything. It was such a wonderful and authentic experience, and it was within feet of the gangway. A Cabaret performance was also offered, but I was too distracted by the food and atmosphere inside the market, I literally couldn’t get enough of it. I even stopped to smell the flowers, I can’t remember the last time I did that. 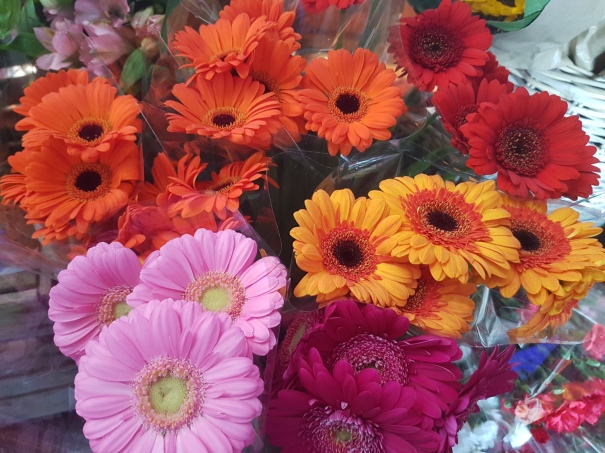 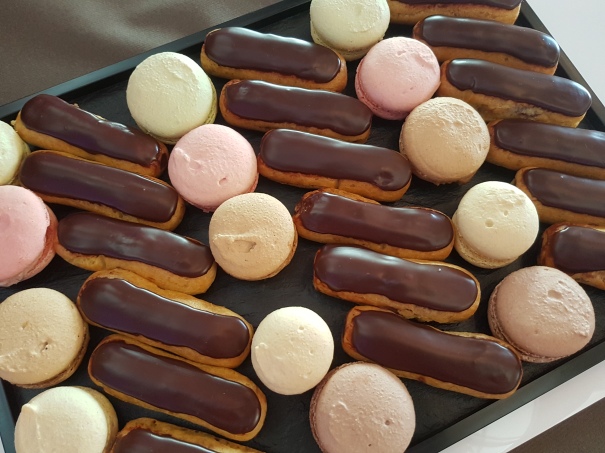 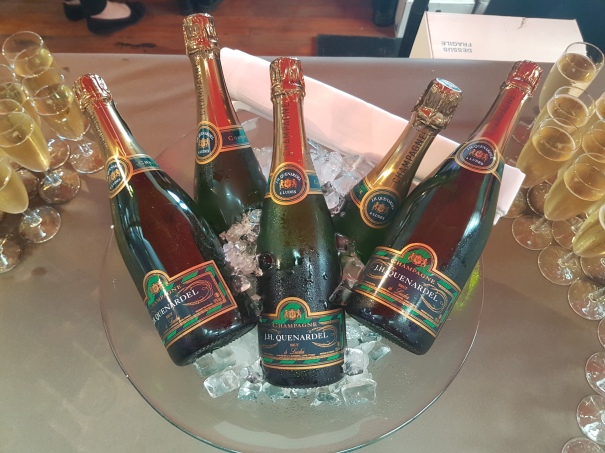 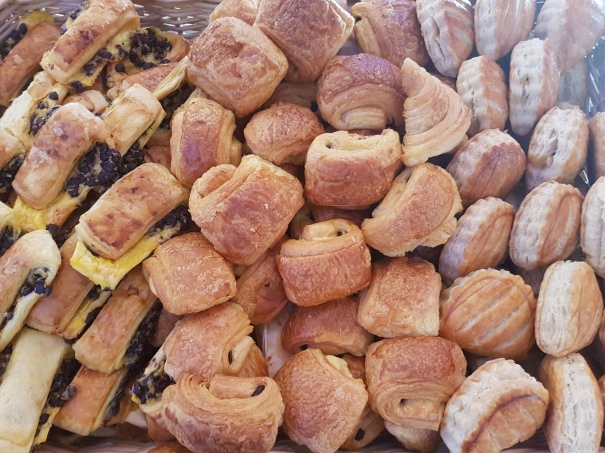 Our final evening on board was all about the White Night Dinner & Party, something I’d been looking forward to since I received the itinerary for the sailing. The pool deck was transformed into a stunning al-fresco dining area and everyone was in good spirits. Again, there was an abundance of food on offer, including fresh oysters, steak, lobster tail, tempura shrimp, fresh pasta, rice, vegetables and kebabs – a bit of everything, basically. I managed to get as far as the lobster tails, tempura shrimp and steak. I had enjoyed the French market too much and now I was regretting having that second pastry. Everything I put on my plate was delicious, the lobster was absolute perfection. I desperately wanted to go back for more, but there was just no space. The White Night carried on late into the evening and there was live music to compliment it. It was fabulous, I had such a great time. The more time I can spend out on the open decks, the better, so any event like this is always a big hit in my book. 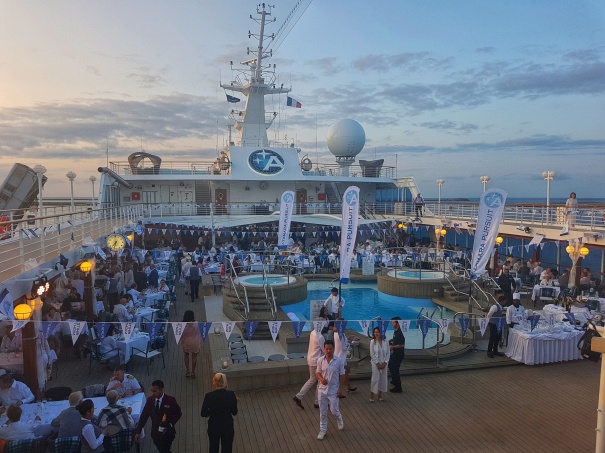 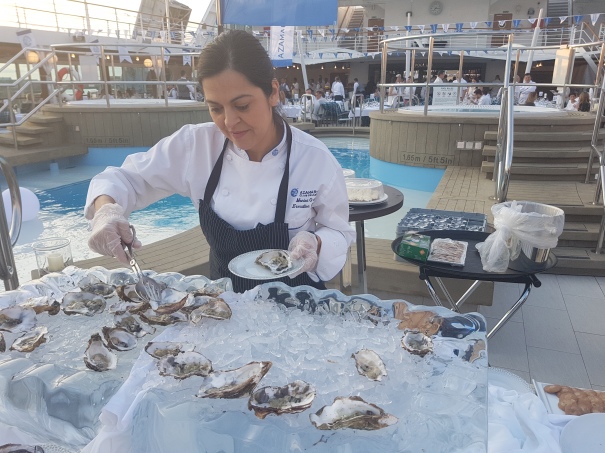 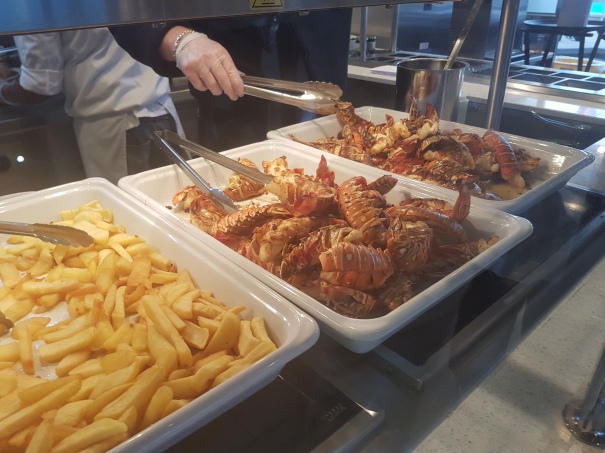 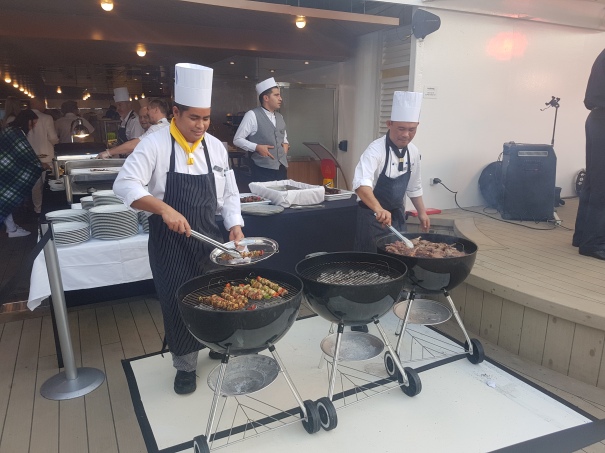 Southampton was on the horizon as Azamara Pursuit arrived back in the UK. I stopped for a quick breakfast in the Windows Cafe before disembarking and that too was varied. There were fresh waffles available, scrambled eggs, fresh fruit, bacon, sausages, beans, a selection of breads, yoghurts and cereals. Everything you’d expect and a little bit more.

One thing I enjoyed immensely on Azamara Pursuit (and it’s not something I usually take much interest in) were the flowers. Everywhere I went there were beautiful arrangements of tropical flowers and plants and the colours were magnificent. I couldn’t stop looking at them, smelling them, touching them and taking pictures. I’d never seen some of them before and for some reason I was transfixed. 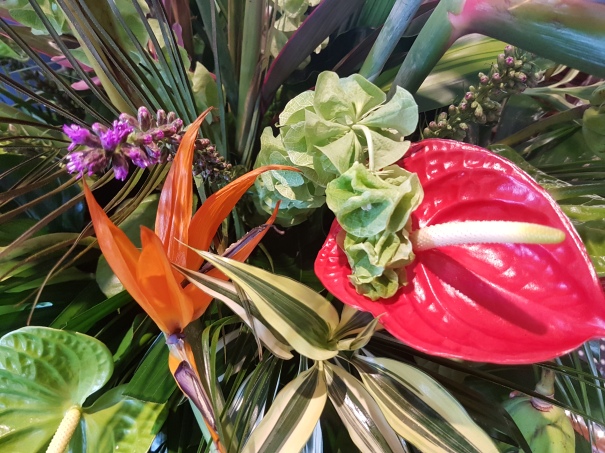 Two nights was not enough time to fully immerse myself in the Azamara Club Cruises experience but what I did get to see and do has left me craving more, a lot more! I was hugely impressed with every aspect of not only the ship, but her crew, the food, the level of service throughout and, of course, the AzAmazing Event.

Thank you to everyone at Azamara Club Cruises for 2-days I’ll never forget!

If you’d like to know even more about Azamara Club Cruises, you can also head over to Heather On Her Travels for A Guide To Luxury Cruising On Azamara Pursuit.

Categories
Recent Posts
My Tweets
Instagram
Back in my happiest of HAPPY places!! ❤️⚓️🚢 #EnchantedPrincess #DiscoverWithPrincess #PressTrip This is my WORLD! 🥰🌍 #MermaidWithLegs 🤣
The entrance to Take Five on #EnchantedPrincess. It's one of my favourite features/spaces. I love the modern luxury of it and THAT chandelier! 🚢⚓️😍 #PressTrip
Follow CruiseMiss Cruise Blog on WordPress.com
RSS Links
Loading Comments...
%d bloggers like this: