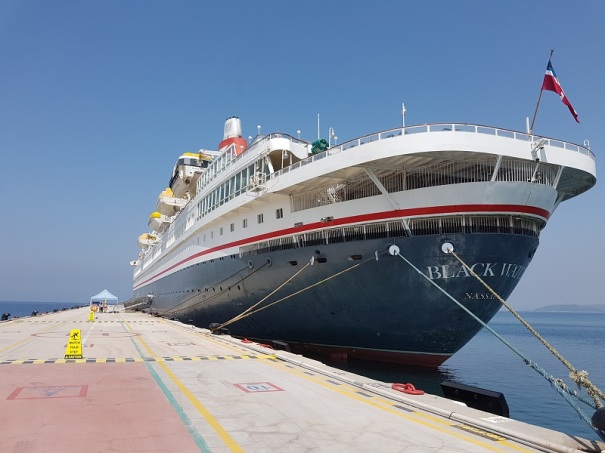 We’ve called to Turkey, Greece, Italy and Spain since I last checked in with you and I didn’t really do much in any of the ports. I’ve had so much writing to catch up on and because I decided to buy half of Asia, I’ve been trying to sort out my cases and decide what to pack and what to carry off myself. I was also starting to feel tired of tours. We have explored so much on this cruise, I just wanted the last few days to be at my own pace.

I love Kusadasi, it’s a shoppers paradise and I decided to spend my morning walking around the bazaars. I’d planned on buying 2 Turkish lamps, but instead ended up with a lantern. I decided it would be easier to get that home and it’s very pretty. I know I shouldn’t have bought anything else, but these things happen. Once my shopping and walking was complete, I met Marian for lunch at Gayret, a restaurant mainly offering seafood but they also have an extensive vegetarian menu, ideal for Marian. I ordered the chicken shish and it was nice but the meat was a little fatty. I think the cat that came and sat beside me knew I wasn’t going to eat it all and she kept staring at me and putting her paws on my leg. I gave in, wrapped up the meat and persuaded her to follow me to a quiet corner, away from the restaurant, where she could enjoy her feast in peace. I can never say no when there are animals involved and she was clearly hungry. 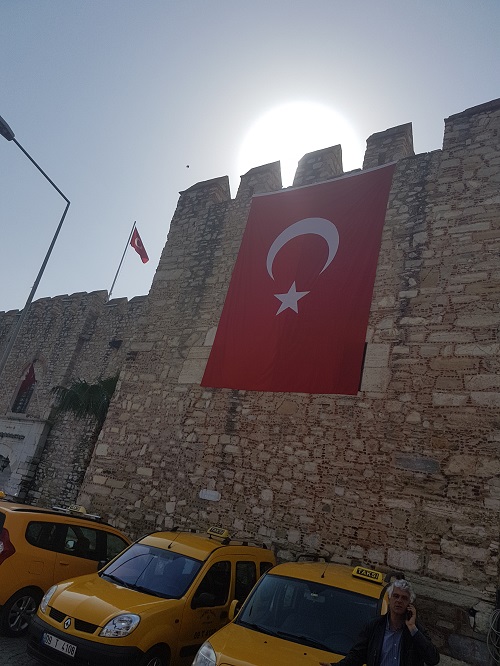 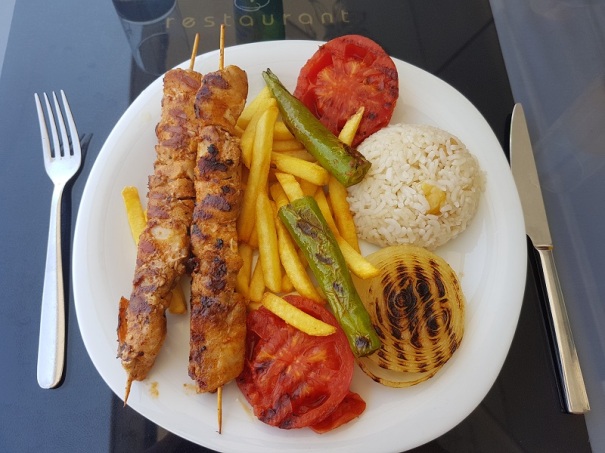 During our call to Piraeus, I decided to stay on the ship. I’ve been to Athens before and I thought it would be a good time to take advantage of a quiet ship and start some packing. I spent the morning sitting in the sun. I knew there wouldn’t be much more of it once we started heading towards Italy and I wanted to enjoy just a few hours of doing nothing. I was quite content, until a bee the size of a small bird decided to chase me off my sun lounger. That wasn’t fun! Once I’d had enough of the sun, I took myself down to Deck 6 for what would probably be my last Poolside lunch – they close it once the weather starts to go downhill – and I ordered my usual, chicken kebab with hummus, yogurt and pita bread. It was delicious. 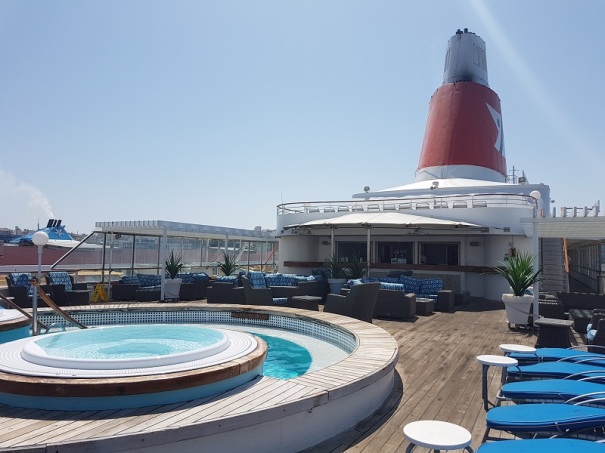 In the afternoon I decided to start tackling the suitcases. I use SkyFlite cases and on this cruise I managed to fill 5 of them. By early afternoon, the cabin was a complete mess and my head was ready to explode, but I did manage to completely pack 2 cases. In a computer game I’d expect that to be an “achievement unlocked” moment, so to celebrate I ordered myself a drink from the bar.

My plan for Civitavecchia had been to pack and work, I’ve been to the port more times than I can remember and there’s really not a great deal to do there unless you go on a tour to Rome. I’ve been there and done that so I just went ashore for a few hours and had a walk around. I then came back to Black Watch and continued with more packing and more writing.

Livorno was our next port and I left the ship just before lunch. The shuttle was quick and the drop off point was the usual place, outside McDonald’s. I walked along the main street, stopped for lunch and then decided I’d take a walk to an area I’d not explored before. I was shocked, it was another large shopping area but there were hardly any tourists, it was perfect. If you leave the shuttle and head right, you’ll find it. I stopped at a lovely bar called Casablanca and had a drink before walking back towards the shuttle stop. I took a brief detour before getting on the bus and again found some lovely side streets with beautiful waterways. It felt a little bit like Venice, but it wasn’t quite as impressive. I actually really enjoyed my afternoon in Livorno. Next time I’m there I’ll head back to the same area and see what else I come across. Having no plan is sometimes the best way to enjoy many ports, especially those in Europe. You can often come across some real hidden gems. 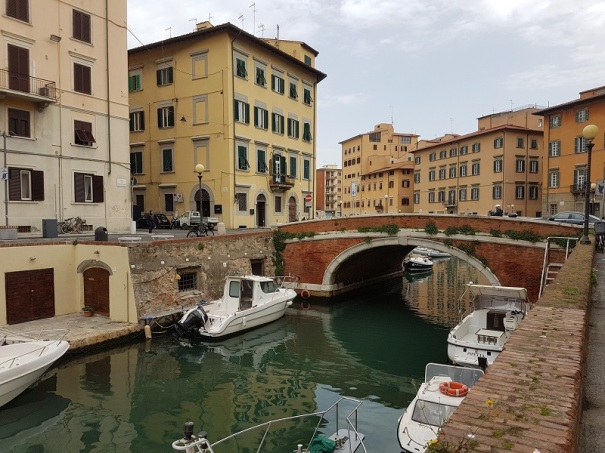 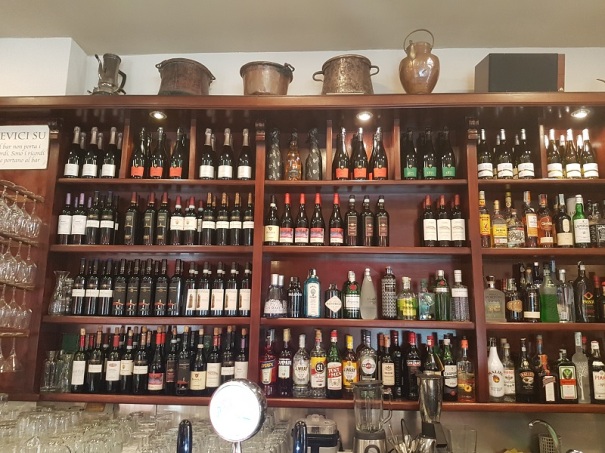 Our final port of the cruise was Malaga and it was so cold! I threw on some jeans and a jacket and Marian and I went in search of tapas. There were dozens of restaurants to choose from, but we finally settled on a place named Pepa y Pepe. The food was good, I ordered chips with garlic sauce, fried mushrooms and fried prawns. I especially liked the mushrooms and the portion sizes were just right. On our way back to the shuttle area, we stopped for a drink at a bar called Cafe de Estraperlo. I loved it. It was just opposite where the shuttle buses were waiting. The man running the bar is called Mark and he was so lovely. A place worth stopping if you’re ever in Malaga and just want to relax and people watch with a light and delicious snack. 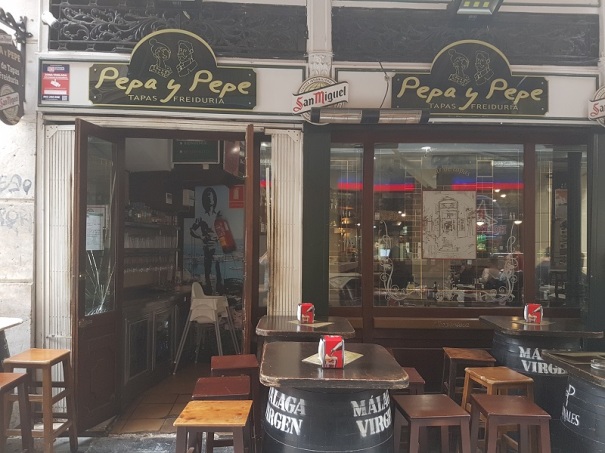 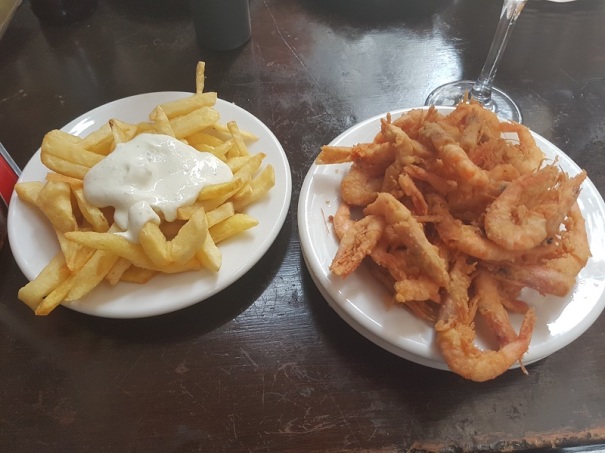 We’re getting closer to Southampton by the minute, we’re in the Bay of Biscay now, and I’m incredibly sad. This has been a real experience of a lifetime and I’d love to stay onboard and do it all again. Black Watch feels like home and we’ve made so many new friends, I don’t want to say goodbye, I hate saying goodbye. I’m sure it won’t be long before I’m back on another Fred. Olsen ship. I just can’t seem to stay away! I’ll update you soon with some blogs about the onboard experience and what it’s like to be on a ship for almost 4 months, but for now, this is my last live blog of the World Cruise! 😦