Darwin was our next port and our day was going to involve the Jumping Crocodile Cruise. I’d researched this before we left on Black Watch, but it can take 90 minutes to get there if traffic is bad, so I decided that the best thing to do was book directly with Fred. Olsen. 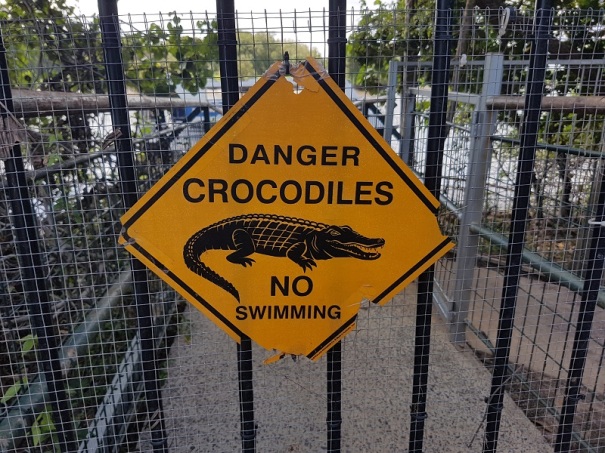 We left the ship at 9AM and we were soon on the highway, heading way out of town and to the wetlands. We arrived in just under one hour and as soon as we got off the coach, we were offered complimentary cold drinks. Just what we needed as it was another blisteringly hot day in the Northern Territory. Before long, we were in the boat and ready to head off down the Adelaide River and look for crocodiles. 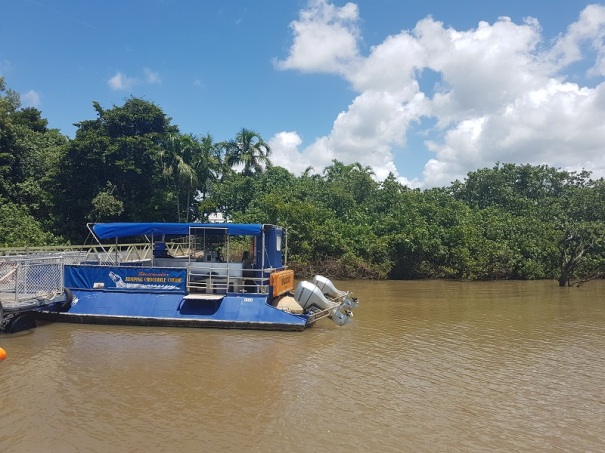 Within minutes we were face to face with a 4 foot monster and he was a beauty! They use buffalo meat to tempt the crocodiles and they do so by tying it to the end of a pole and then dipping it in the water. The crocs feel the vibrations and that’s what attracts them and brings them towards the boat. We met several individuals, including Stumpy (he only has 1 leg) who is approx 70 years old, his girlfriend Candy who is 20 years old and a smaller female they call Beyonce. We also caught a glimpse of Trevor, he was responsible for the loss of at least one of Stumpy’s legs. They had a fight over Candy and although Trevor may have won in the battle of the males, Stumpy was still the one who won the lady. 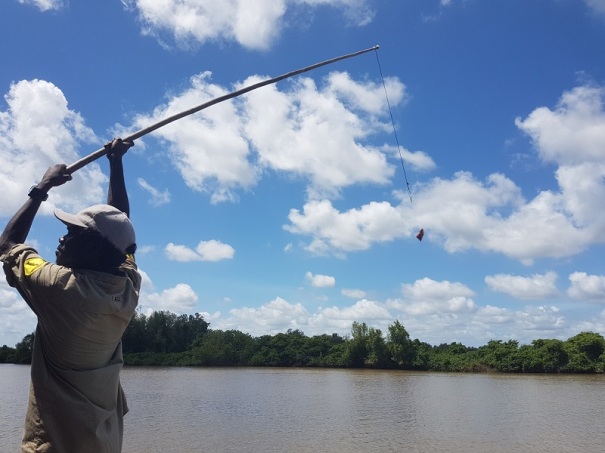 The power these animals have is incredible, it’s easy to see why they are an apex predator. Not much would stand a chance against even a 2 metre female. At one point, Beyonce went to grab the meat but missed, so her top and bottom jaw slammed against each other. The noise it made was incredible. Pure force. It actually made me jump. I think Beyonce was my favourite. She was the smallest of them all, she was a beautiful colour and she was actually quite shy. She kept disappearing beneath the surface of the water and popping back up when we least expected it. Shy or not, she gave me a great smile in the picture below! Although Beyonce was a little on the jittery side, the other crocs certainly weren’t shy, as soon as the meat was in the water they made their way over to see what was going on. I’m sure they were also checking out the tasty looking chunks of meat (us humans) that were sitting on the boat. Our driver/expert commentator said that they do have the ability to find their way aboard if they decide they want to. Needless to say, everyone was on lookout, just in case! 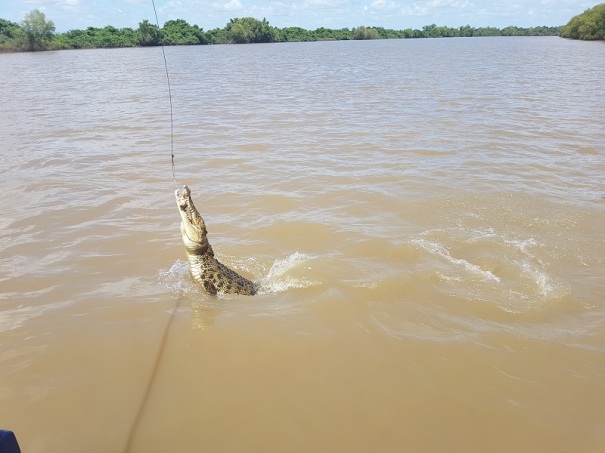 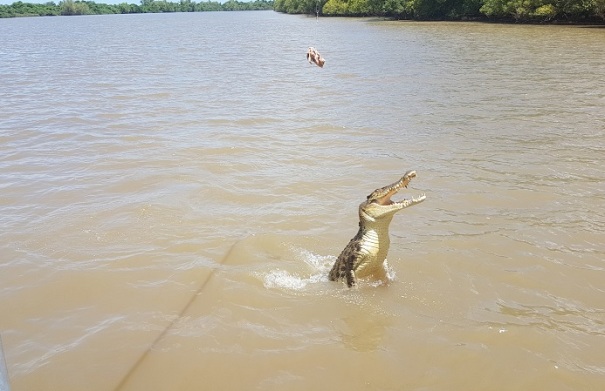 It was a fabulous tour, I thoroughly enjoyed every minute of it and I’d highly recommend it if you’re ever in Darwin. These are completely wild animals, if they don’t want to come over and see what’s going on, they won’t. It’s that simple. During the tour, our driver also told us that the plastic crocodile outside the entrance to the Jumping Crocodile Cruise (below) is a replica of the largest crocodile ever found and killed in Australia. In 1957, a lady named Krystina Pawlowski killed the animal with one clean shot – it was 8.63 metres in length. The kill earned her a place in the Guinness Book of Records, but it also filled her with deep regret. She’d taken the life of this beautiful and unique creature and this single episode would spark the next chapter in her life, crocodile conservation. I don’t know the entire story, but our driver said that she tried incredibly hard to protect the species and study their behaviour, mating and feeding habits and more. She died in 2004.

Our next port was Komodo Island and I was booked on the Komodo National Park and Pink Beach excursion. I was excited to get ashore as Komodo was always a place I knew of, but never thought I’d get to visit. The scenery was stunning and the tender ride ashore was flat calm. It was perfect. We’d been on the beach next to the ranger station for less than 5 minutes when we spotted a baby Komodo. He was about 2 years old and not bothered in the slightest by our presence, however we were fully aware of the fact that he was there.

We left the beach behind and began our jungle trek to a watering hole where the dragons are usually found. We walked for about 45 minutes and then came across 3 adult Komodo Dragons – what a sight! They were huge! At least 3 metres long and they seemed to be relaxing and taking shade from the sun. We stood for a while taking pictures and as we walked, we noticed another large dragon hiding in the bushes. The rangers were soon there to make sure we didn’t get too close to it!

Komodo Island is home to around 2,500 of the dragons, but they can also be found on 4 other Indonesian islands: Rinca, Flores, Gili, Motang and Padar. Between these islands there are another 2,500. There are more males than females, a ratio of 3 to 1 and they can live for up to 50 years. On average, the female will grow to around 2.5 metres and the male to 3 metres. If you can’t tell by the size which is male and which is female, a good thing to remember is  the male has a bigger head.

On our way to the jetty to join the boat for our trip to the Pink Beach, we spotted another dragon and a very small Scorpion! I almost stood on it. I’d never seen one before so leaned in for a quick photo, but I didn’t get too close, just in case!

The Pink Beach was actually pink and it was gorgeous. We had to use a small boat to get from our larger pirate boat and to the beach, that was…interesting! I put my feet in the sand, dumped my bag and grabbed a snorkel. It was so hot, I was desperate to get in the water. I walked in and the water was freezing! I’d expected it to be warm. There were bits of dead coral everywhere and they were quite sharp, so instead of walking further, I put on my mask and snorkel and just started swimming. Within less than 30 seconds I was face to face with the most incredible sight I have ever seen. There was live coral and hundreds of fish surrounding me. I was gobsmacked. I hadn’t expected that at all. I knew they said it was a good beach for snorkeling, but what I was looking at was something I never dreamed of. I always thought you had to go deep sea diving to see something that beautiful, but there I was, staring at it. I wish I’d had an underwater camera! I spent 2 hours in the water, admiring everything that was in front of me. At one point, I just floated and remained as still as possible, at least 40 fish started coming toward me, checking me out. There was one small fish – he was a silver colour and shaped a bit like an Angel fish – and he swam right up to my mask. I thought I was going to cry – not a good idea when using a snorkel – because it was so beautiful and completely unexpected. If you ever go to Komodo and the Pink Beach is an option, PLEASE go! You absolutely must! Words and pictures can never truly relay the feeling you have when you can see something like that with your own eyes. You have to either swim to the shore from the boat or take a very, very small boat (about the size of a bath tub) from the main boat and to the beach, so make sure you can do this before booking. Komodo is now one of my favourite ports of the cruise and if I ever get the chance to go back, I’ll be fully prepared. I will NEVER forget that day for as long as I live. 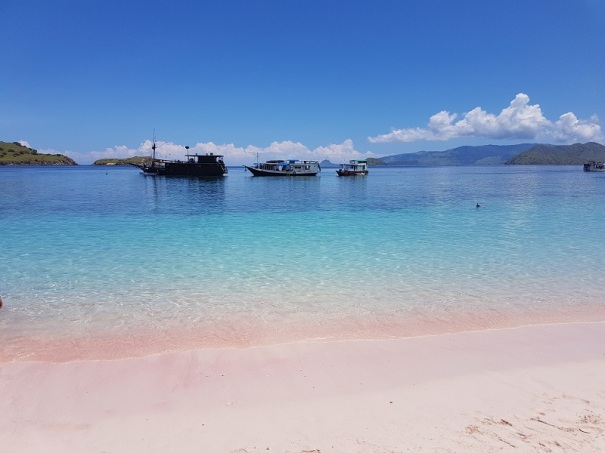 After all that excitement, we lifted our anchor and began our journey towards Singapore. We arrive there tomorrow and then it’s Malaysia right after – a busy 2 port days ahead! Again, both are new for me, so I’ll be out exploring. I’ll be doing more updates on the ship and everything onboard in the coming weeks, just for anyone that is interested in learning more about Black Watch and the Fred. Olsen experience, so watch this space. I’m loving every moment onboard and every moment ashore! This is THE trip of a lifetime.