We spent several fun-filled days at sea before reaching our next port of call, Hanga Roa, Easter Island, Chile. There was sun, cloud and a tug-of-war. Yes, you read that correctly, a tug-of-war. Passengers, for obvious reasons, weren’t allowed to take part, but we could bet for the team we wanted to win – all of the money taken that day will be donated to the RNLI. There were several teams of 5 from various departments, including deck, housekeeping, senior officers, bar, galley and engine room. It was a very hot and sunny day, but the decks were packed several deep with people cheering and shouting. The overall winners were the group of senior officers, but the deck girls gave a lot of the teams a run for their money. The girls from the bars, they didn’t stand a chance, they were almost pulled off their feet! It was a fun way to pass a few hours. We also had a tropical deck party with BBQ that evening. 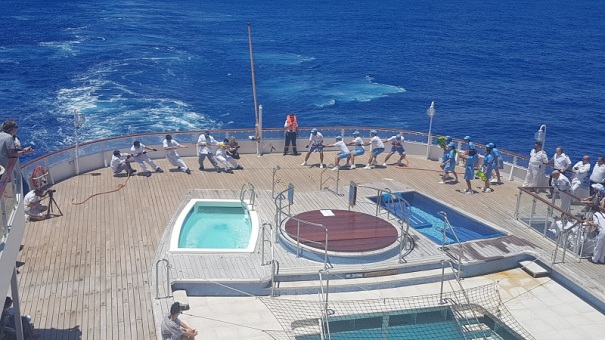 On February 6th, we arrived just off Hanga Roa, Easter Island and it was a beautiful morning. The tender service started early and Marian and I were on our way not long after 10AM. Once ashore, we met with Roberto, he was our local guide for the day and he was superb. We jumped in his Jeep and he took us to a local store to buy water before we began our journey into the Rapa Nui National Park. The park itself is actually spread across the island (there are 4 sections), but you have 1 ticket that allows you access into each place. The tickets are $80USD per person and can only be paid for in cash. You MUST keep it safe as you will need to show it at each place you visit. We started with a stop at Orongo. This is one of the most important places on the island and its history dates back many, many years. It’s also where scientists discovered rapamycin – a drug used across the world to help with organ transplant rejection. Orongo was originally a ceremonial village at the centre of the Birdman Cult in the 18th and 19th centuries. Their annual ritual was to bring the Manutara egg back from the nearby island of Moto Nui, but the egg had to be undamaged. Many islanders fell to their deaths during this race, but some simply stood back, watched and waited for their turn the following year, when the leadership was passed over.

Our second stop was at Rano Raraku and I was blown away. I’d not researched Easter Island much before leaving on the cruise, but I had looked at enough to know what points were of the most interest to Marian and myself. I wasn’t prepared for Rano Raraku, I don’t think anyone could be. It’s known as the Moai Quarry and there are moai statues everywhere, around 397! Many of them are standing, although you can only see the heads and shoulders as the majority of each statue remains underground for preservation reasons. The stone here was used for 95% of the islands moai statues and it is an incredible sight. One of the most famous moai at Rano Raraku is Tukuturi. Unlike the other statues, he is presented with a beard and a kneeling posture, whereas most others are upright. It is believed that the statue represents a riu singer and it is likely that it is one of the last moai ever made.

We left Rano Raraku behind and made our way to Ahu Tongariki, which can actually be seen from Rano Raraku. Here, there are 15 moai that have been restored, including an 86 tonne moai that is the largest ever to be erected on the island. The moai here were toppled during the country’s civil war and in the 1960’s a tsunami swept the ahu inland, so they’ve had their fair share of misfortunes, but today, they stand with pride, overlooking this wonderful island. They are truly incredible.

We ended our day with a stop at Anakena Beach where we got to see the Ahu Nao-Nao moai. There are 7 in total but 2 of them have badly deteriorated. The beach is stunning and the restaurants were full of people enjoying local cuisine. There were also several people on the grassy areas enjoying BBQ’s and family time. 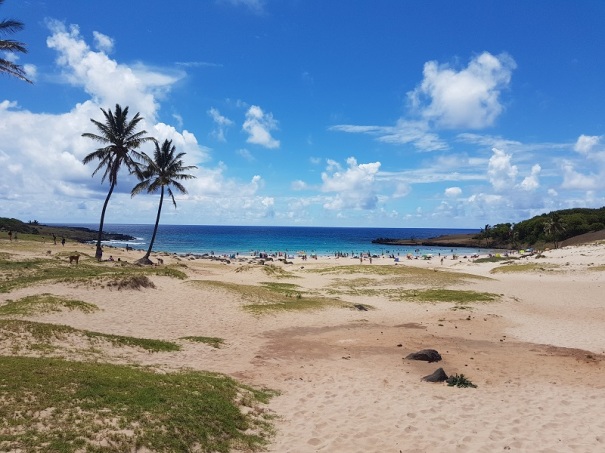 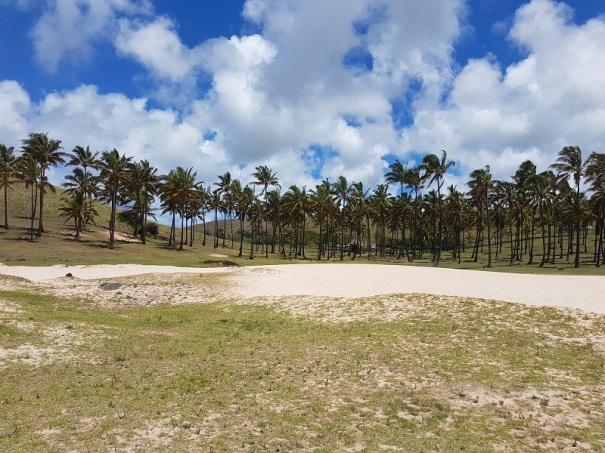 When our time ashore came to an end, we made our way back to the tender area. There had been issues throughout the day because of sea conditions and it was clear that we were in for a bumpy crossing back to the ship. We got off lightly compared to some. The crew really had a difficult time with that tender operation and I take my hat off to every single one of them. They worked incredibly hard to ensure the safety of everyone. It was a challenging day for everyone onboard, but we sailed off into the sunset and started our journey towards Tahiti.

We sailed by Pitcairn Island on the 9th and it was a beautiful day. We’d all just assumed we were sailing by and continuing on our way, but no. We stopped close to the island and several islanders came across to us with bags full of local arts and crafts. They boarded the ship and set up stalls on the aft deck. It was a nice treat for us all, we hadn’t expected a market on the deck or the talk about the island that then followed. We were incredibly lucky. The Pitcairn Islands are a group of volcanic islands that form the last British Overseas Territory in the South Pacific, the only inhabited island is Pitcairn. Pitcairn is the least populous national jurisdiction in the world, approx 50 people currently live there. I met one gentleman who was the islands doctor, vet and dentist. It was fascinating and the people seemed very happy living there, but it’s very remote. They get supplies every quarter and I understand that the only livestock they keep on the island are goats and chickens.

We left Pitcairn behind and we’re continuing our journey to Tahiti, we have 1 sea day left before we arrive. The weather turned overnight and we have rough seas and rain today – I hope it settles before we arrive in Papeete and then stays away so we can tender in Bora Bora.