Hello from Black Watch! I’ve been onboard for a few days now, so I thought it was about time I checked in with you all and gave you some updates on the cruise, this lovely ship and our first port of call, Ponta Delgada.

OK, let’s go back to the very beginning. I arrived in Southampton, following another smooth journey from Newcastle with Eavesway, and Marian and I were checked-in and onboard within less than 30-minutes – which I would expect given that there were less than 400 people joining that day. It was the quietest check-in hall I have ever seen.

We arrived at our cabin on Deck 4 and I was pleasantly surprised by the size, although Marian and I managed to fill it within record time. We had 9 cases between us, but we still have some space left. When I opened the cabin door, the 2 cases that I had sent in advance with The Baggage Handing Company were in the cabin waiting for me. I would highly recommend this service and I will be using it again in the future. Everything was hassle free and on time.

Our cabin is very comfortable and I love our little portholes. It’s our home away from home for the next 4 months and we have made it our own. Marian (TravelShopGirl) brought magnetic hooks, which we attached to the ceiling and then hung small storage bags from – it saved taking up drawer space. We also have some hanging storage in the bathroom and we made use of the space under the bed. All we need to do now is get through some of the toiletries etc, so we can make room for shopping in port! Below is a picture of our cabin, but I’ll take another soon – we were still mid-way through unpacking at this stage. 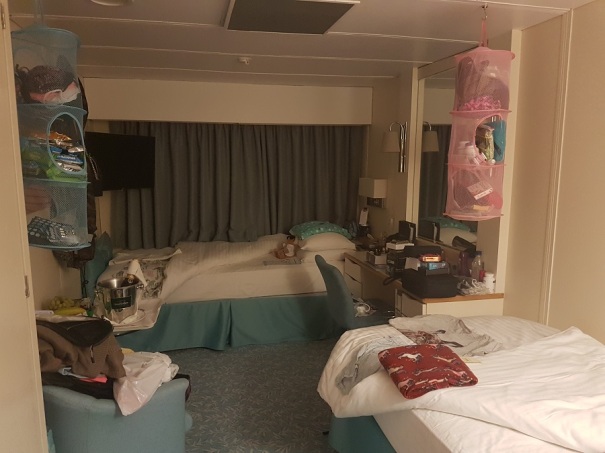 Our first few days were spent at sea, battling the rough weather and simply enjoying the onboard atmosphere. I bumped into passengers and crew that I have met on previous cruises and the overall vibe was good – everyone was excited to be beginning such an epic journey. Marian and I enjoyed drinks in the bar, we joined in on a few quizzes and we spent most of one day playing Escape Room games on my phone. Basically, we took it easy and simply relaxed into the cruise. When you spend most of your life rushing around, it’s nice to have some time to sit and do nothing. It’s also good to have a little flutter on the roulette wheel and leave with more chips than when you started, although I suspect by the end of today, we’ll both be back to where we started. 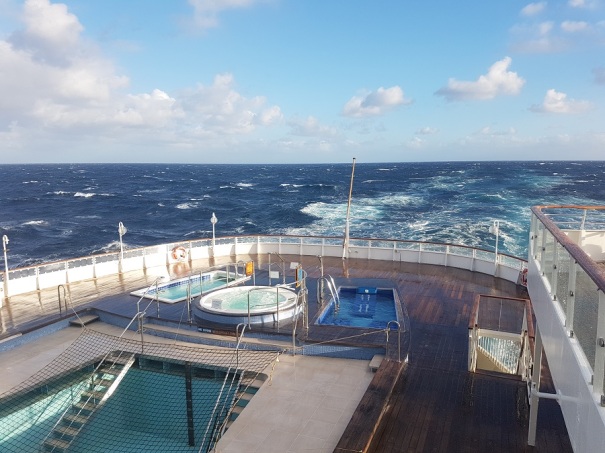 Our first port of call was Ponta Delgada in the Azores and we’d arranged and excursion to Furnas with Cruising Excursions. We docked 3 hours earlier than planned, but our guide was there waiting for us and we were soon on our way. We stopped at Vila Franca do Campo en-route – previously Ponta Delgada’s main city – where we had stunning views of another volcanic crater and then we made our way to a wonderful old church (Our Lady of the Peace Hill) that had spectacular views, before continuing the journey to Furnas. The Furnas volcano is a major dormant volcano of siliceous nature, with a summit subsidence caldera. This huge volcanic depression has an elliptical shape, 8×5.6km in size and includes a hugely important geodiversity. This is expressed by the Furnas lake, several small volcanic landforms (pumice rings, lave domes and scoria cones), fumarolic fields and many types of mineral and thermal waters.

The main reason for Marian and I choosing this excursion was because we both have a mutual interest in volcanoes and the type of landscape that comes with it. I find it fascinating and even more so that people in Ponta Delgada live within the crater. While we were there, our guide explained to us that locals, especially restaurant owners, pay to have small holes in the ground at Furnas (Caldeires at the Lake) where, during the early morning hours, they arrive with pots filled with meat and vegetables and they let this cook underground for 6 hours. When ready, they return and remove the pots and then serve the traditional stew in their restaurants. 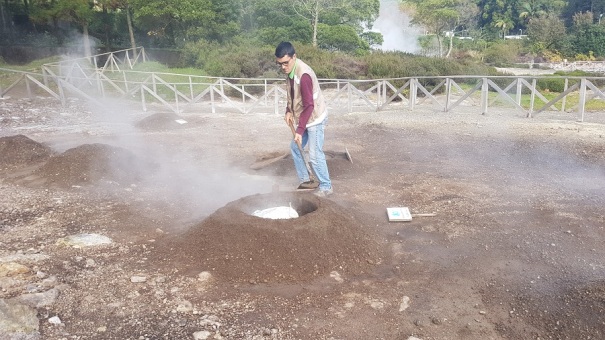 The area is smaller than I expected but incredibly beautiful! We left the lake and made our way towards the village of Furnas, located within the crater, and then drove up to Pico do Ferro where we had an uninterrupted view across the entire crater – including the village and the lake. It was magical, it really was. I expect on a cloudy day the views wouldn’t be quite the same, but we had glorious sunshine and we found ourselves looking out across this rich green land. You must visit! Huge thanks to Miguel for spending the day with us – make sure you ask for him! 😉

We were supposed to call into Horta the following day, but unfortunately the weather forced the Captain to change our plans. We left Ponta Delgada earlier than originally planned and we were straight out to sea – we had to avoid the worst of the weather that was quickly closing in on us. The last few days have been quite rough, especially last night, but we’re hoping that everything will soon start to settle down and we may even be in Bermuda on Sunday night now, as opposed to arriving on Monday morning.

So far, everything onboard has been superb. The crew are very friendly, and we’ve been made to feel at home from day one. I will always rant and rave about how good Fred. Olsen Cruise Lines is and so far, this cruise is proving to be exactly as I expected. I really do feel at home and I’m so excited to see what the next few months have in store for us. We’re a family on here, a small community heading into enchanting lands and I know that it’s going to be unforgettable. I’m also enjoying working my way through the scallops and prawns!! 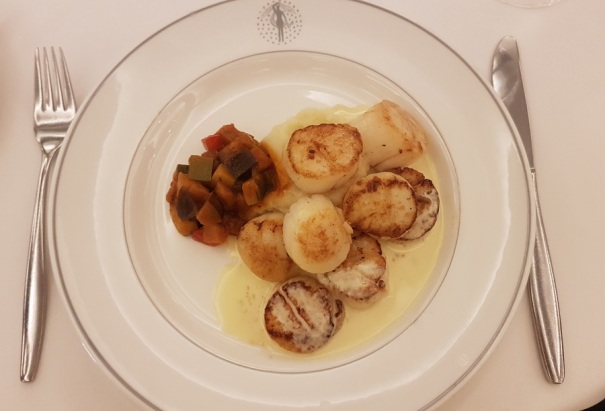 I’ll check back in with you all very soon, until then, don’t do anything I wouldn’t do! 😉