Back To The Very Beginning With P&O Cruises 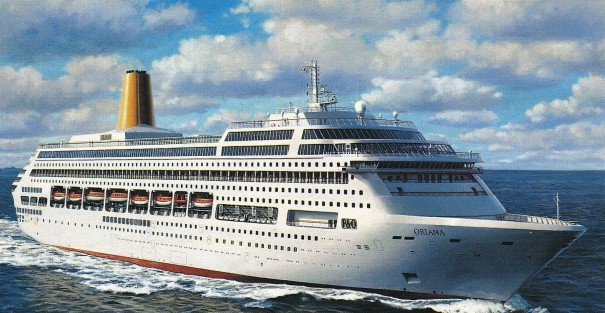 I embarked on my first cruise in 2007: a 12-night voyage to the Canary Islands aboard P&O Cruises ‘Oriana’. Since then, I have tried many other ships and many other cruise lines, and I have been lucky enough to sail to some incredible places, but every time I see a ship that bears the sun (and now a huge Union Jack), I can’t help but lose a little piece of my heart to her.

You NEVER forget your first cruise, and although you may sail aboard other ships and to more exciting destinations, that first ship will always be the ONE. Unless you have been on a cruise, you won’t really understand what I mean and will probably think I’m a little bit weird, but those that have will know exactly where I am coming from. You don’t just enjoy the destinations that you sail to, the ship itself becomes so much more than a mode of transportation. It becomes a place where wonderful memories are made and great new friendships are sparked. It becomes a place where you feel at home and safe – you’ll never get that feeling from a hotel on land. Plus, there are so many exciting things to experience, things that you can only ever experience from the deck of a ship: the muster drill, sailing into port, watching the crew lower the gangway, eating your breakfast on your balcony while watching a pod of Dolphins swim by…I could go on and on, but you get the picture!

Oriana hasn’t really changed that much since I first sailed on her in 2007. I cruised aboard her again in 2008, but following that, it would be 2015 before our wakes would once again cross. She brought back so many wonderful memories and the instant I stepped onboard it was like I had never been away. On the cruise in 2015, she sailed me to the Arctic Circle – a destination that really took my breath away. It’s still one of the best cruises I have experienced and I can never say enough good things about it. There she was, helping me create lifelong memories, once again, through travel.

P&O Cruises had started something inside my heart back in 2007, and it gently simmered away for many years – even I didn’t know what was to come! Eventually, it made its way to the surface at full boil and I left my steady job to take a risk on something entirely new. I wanted to see the world and I wanted to do something that put me in a position to allow work and travel to compliment one another – CruiseMiss.com was born…in theory, anyway.

I started this blog (what I am writing now) with the intention of going in one particular direction, but it seems that my fingers have typed me onto another course. I’m not going to go back and change it, I’ll stay here now and end by saying that if you want to do something, go and do it! We are placed on this earth for one show and the curtain soon comes down. Don’t get to a point in life where you wish you had done something – make it happen.