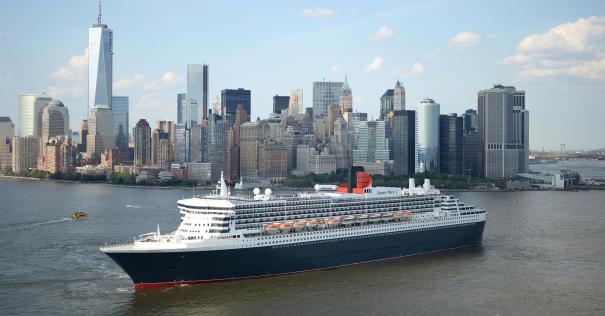 It’s almost time to begin my Cunard and American road trip adventure and I’m so excited that I had to do another pre-cruise blog.

I’ve never sailed on Queen Mary 2 before, but I did visit her once in Greenock in Scotland. As soon as I stepped aboard I felt like I had been taken back in time and I absolutely loved that about her, I had that same feeling when I boarded Queen Victoria, too. A lot has changed onboard Cunard’s flagship, however, since my last visit as she recently returned to the fleet following a multi-million-pound refurbishment – one of the most expensive refurbishments a cruise ship has ever had!

During her refurbishment she received 15 new Single Staterooms (I have one for my Eastbound crossing), which were definitely needed, and 30 additional Britannia Club Balcony Staterooms – her pre-existing Britannia Club Balcony Staterooms were all refurbished. All of her Queens Grill and Princess Grill suites were also refurbished as were the accompanying restaurants. The Winter Garden was transformed into the Carinthia Lounge, the Kings Court buffet was given some care and attention and The Verandah Restaurant was added. She also had extensive work done to her kennels, including the addition of some new homes at sea for our four legged friends. I think just about every single inch of her received some kind of attention, even the grand atrium was given a new lease of life and from the photos I have seen, looks absolutely wonderful.

This really is going to be an incredible experience and it’s one that I have been looking forward to for many, many years! I have a Britannia Club Balcony stateroom for my crossing to New York, but I’ll still be out on those open decks before sunrise on July 24, so I can see absolutely everything. I’m told you should be out on deck no later than 04:30, so I’ll be there 15 minutes early just to be sure. I should see the Verrazano Bridge dead ahead and Long Island to my right, as Queen Mary 2 passes under the bridge, the Manhattan Skyline should come into view and last but not least, the Statue of Liberty. I don’t know about you, but to me that sounds like the perfect way to not only start a day, but to start a road trip.

My arrival into Brooklyn will be a nice little teaser as I am not staying in New York City right away, in fact, the Big Apple is my last stop before once again joining Queen Mary 2 and sailing home, so I can have a glimpse of what is to come before returning for 5 days at the end of my east coast road trip.

I have only 2 more nights left in the UK before the adventure begins. It feels quite surreal to be honest, it’s taken such a long time to plan and map out and now all of a sudden the day is almost upon me. It has been 15 years since I was last in New York City and I’ve never been to the other places that I am visiting (Boston, Atlantic City, Philadelphia, Lancaster Count, Washington D.C., Virginia, New York state, Lexington and Salem), so there are literally going to be new experiences around every corner.

I’ll be blogging live from Queen Mary 2 during my crossing, but I will have to go into radio silence during my time in America. I will be in a new location virtually every day, so it will be pretty difficult to write whilst on the road. However, if you do want to keep track of where I am and what I am doing, then please join me on Facebook, Instagram or Twitter – all of which will be active throughout the trip.

Until I board the most magnificent ocean liner in the world…have a great day!