A Taste Of Six-Star Luxury With Crystal Cruises

I recently spent 4-nights aboard Crystal Cruises Crystal Symphony and what a truly incredible travel experience it was. I boarded in Port of Tyne – mid-way through her Noble North Sea voyage – and visited Hamburg (our call to Helgoland was cancelled due to bad weather) before disembarking in Amsterdam. It may have only been a small taste of six-star luxury with Crystal Cruises, but it has left dozens of lasting impressions.

I patiently waited at the bottom of the gangway for the two ladies in front of me to board the ship, it made it easier for me to take a run at the stairs with my case if there was no one else there, but before I even made it to the third step there was a man in front of me extending his hand to take my luggage. I followed him to the top, handed over my e-ticket and stepped aboard. I found myself in the atrium and instantly knew that I was about to experience something very, very special! It was beautiful – I could even feel the quality of the carpet beneath the sole of my shoe. I stood for a while, admiring everything, before heading to reception, checking-in and officially beginning my Crystal Cruises adventure.

Deck 10, the Penthouse Deck was my home for the 4-nights and I had a very spacious Penthouse Verandah stateroom with butler – the first female butler at sea to be exact!  It was absolutely beautiful and offered more than enough space for little old me. I had a Queen-size bed, large vanity area, sofa, walk-in wardrobe, balcony and a large area that housed a flat-screen TV, bottled water, champagne, wine, fridge and other little treats. The bathroom was also very impressive with his and her’s sinks, a large walk-in shower and a separate bath with Jacuzzi jets. In short, it really was pure luxury at sea. 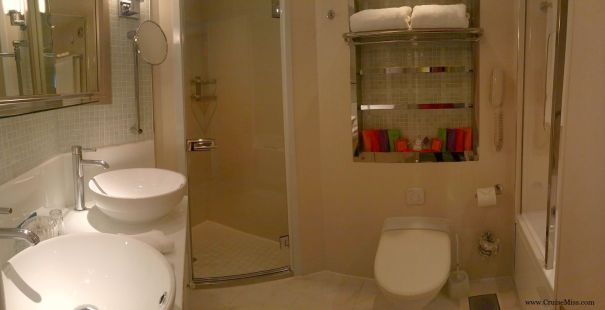 The bed was without a doubt the BEST bed that I have ever slept in. The mattress was firm and the pillows and duvet were absolute heaven! I was offered the pillow menu, but I kept the ones that were already on the bed as they suited me just fine. One morning I actually found myself struggling to greet the day because I wanted to be cocooned in the comfort of the bed and duvet for just a little while longer.

Crystal Cruises also recently started using ETRO bath products and I couldn’t get enough of the body lotion! I also tried the soap, shampoo and conditioner, which were nice, but the body lotion was the overall winner for me! It was so smooth, it almost felt like you were coating your skin in a fine layer of silk.

As I mentioned, I had a butler for the cruise, which was a first for me and it turned out to be a rather pleasant first. I must be honest and tell you that I didn’t really utilise all aspects of having a butler service, for example you can request that your butler unpack and repack your luggage for you, but that’s not something I would ever take advantage of, I would rather do that myself. I did, however, arrange my in-suite dining via my butler and I asked her for an additional pillow. I always expected a butler service to feel somewhat intrusive but it was the complete opposite.

Symphony’s public lounges each offered their own unique feel and my favourite of them all was Palm Court. I liked the entire space and the views were wonderful, it really did ooze luxury and sophistication. Every single thing about it was perfect. You walked in and you knew you had arrived. I also enjoyed spending time in the Avenue Saloon, Crystal Cove, Luxe (which was part of the casino and although very different from Palm Court, it gave me the same feeling) and out on the Lido Deck. Of course, every area onboard was pristine and inviting, but we all have our own favourite little hideaways and they were mine. 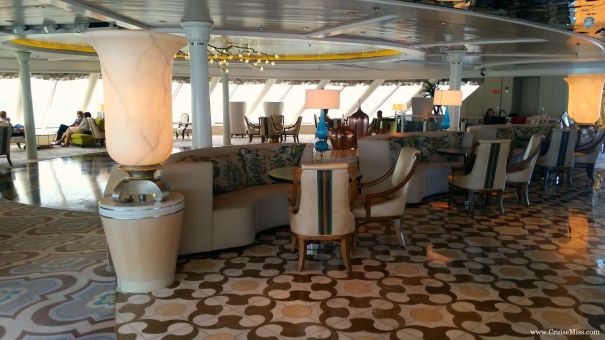 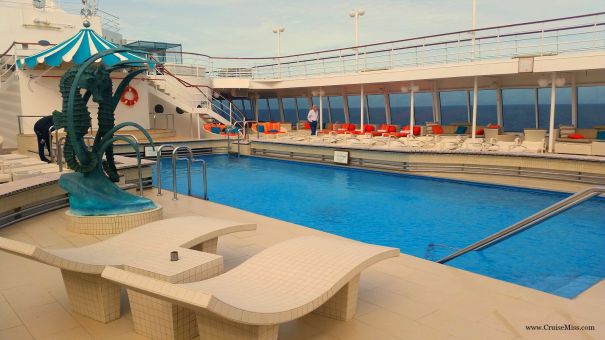 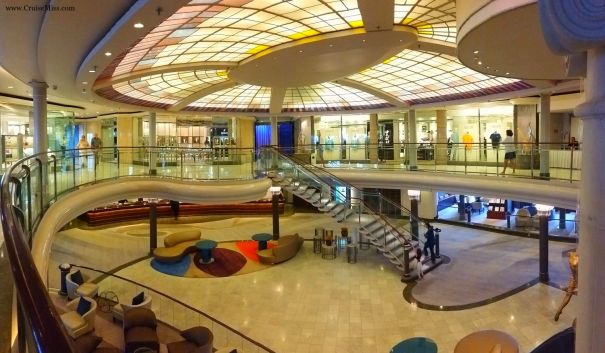 During the cruise I tried in-suite dining – with the menu from the Crystal Dining Room – Silk Road, Prego, Trident Grill and the buffet. I have to say that my favourite meal of all was the one that I had in Silk Road, but the mushroom soup in Prego was delicious and I absolutely loved that it was served in a bread bun! Yes, technically you could eat the bowl too! It looked so good that the couple next to me ordered it, once they had finished drooling over mine.

So what did I eat? Well, in Prego I had the warm lobster poached in sage butter, cream of mushroom soup and spaghetti pescatore, and in Silk Road I started with tempura shrimp which was followed by Nobu-style lobster with truffle-Yuzu sauce and to finish I had a small chocolate pudding with sesame ice-cream. 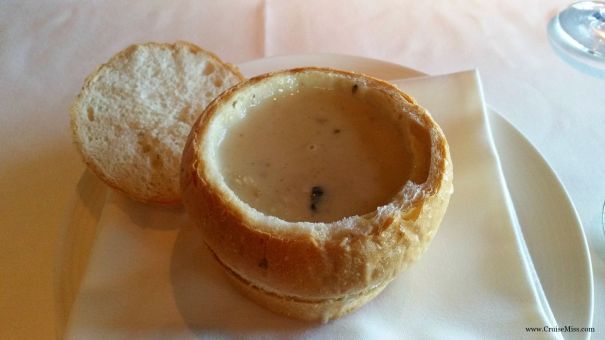 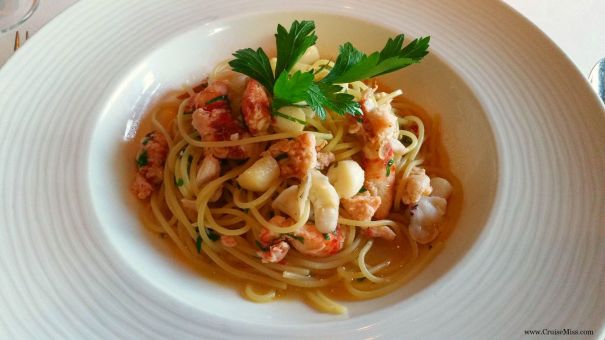 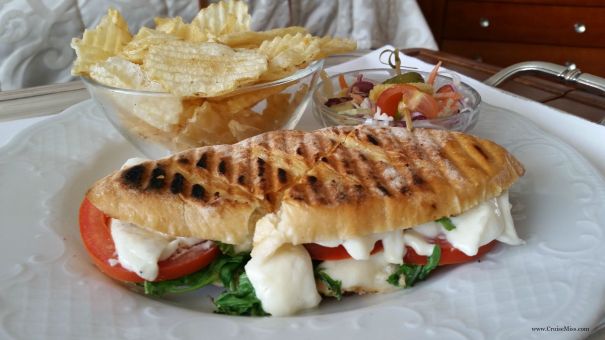 Silk Road also offered an incredible selection of sushi, which I’m afraid was lost on me because I don’t eat raw fish. Other passengers were sampling just about everything on the menu and the lady sat to my right thoroughly enjoyed her sushi selections. It was busy in Silk Road from the second the door opened, so if you are sailing aboard Symphony or Serenity anytime soon then I would suggest you make your reservations within your cruise planner as soon as you can. 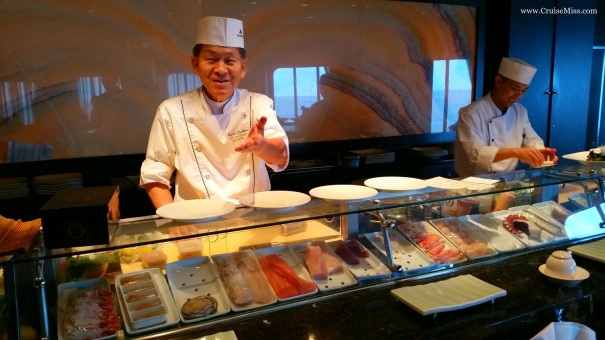 Before I joined Symphony I had browsed the shore excursion options (just about the only thing you have to pay extra for with Crystal outside of the cruise fare) and came across a tour option to Neungamme Concentration Camp. I had wanted to visit a concentration camp for a long time, so I booked a ticket. I appreciate that it’s not something everyone wants to do, but history is important and places like Neungamme should be visited and learned from, and the people that suffered there should never be forgotten. It was a very moving experience, I couldn’t possibly imagine what those people went through. At one point our guide said that over 1,000 people died there every day and that 20 children were taken there from Auschwitz to be used for medical experiments. It must have been truly horrific. One other thing that I found incredibly sad was the camps location: it was nestled in the German countryside, with a beautiful tree lined road leading up to it and a village just a stone’s throw away. If you didn’t know any better you’d think you were just driving down a typical country road, but then, eventually, you come across the first signs that not all is as it seems. Many of my fellow passengers also booked this tour, I think in total there were 3 coaches of us that went to Neungamme. 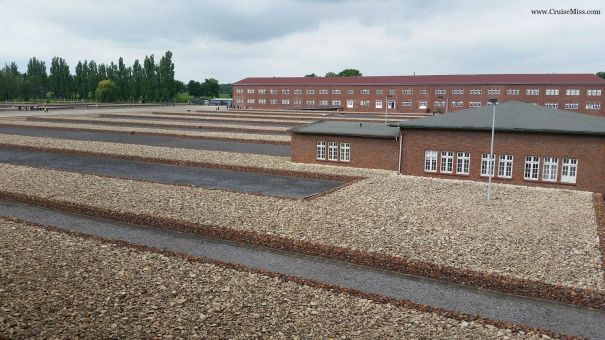 On the last evening there was a party in the atrium. We had live music from Ben Mills (I’m told he appeared on X-Factor in 2006) and he was absolutely brilliant, I really did enjoy his songs, and there was also singing and dancing from Symphony’s resident performers. The party came to an end with the recognition of Crystal Cruises 25 year anniversary and a countdown to the balloon drop from Crystal Cruises President and CEO, Edie Rodriguez. I had seen crew members loading the balloons into the net earlier in the day and it really had me intrigued. I’d never seen a balloon drop at sea before – yet another thing that has now been ticked off my list.

I left Crystal Symphony having had 4 of the best cruising days of my life. The entire experience was everything it was promised to be and so much more. Not a single thing was too much trouble: I overheard one of the other butlers on my deck requesting peanut butter cookies for one of his guests. I don’t know if it is something the galley usually make (I didn’t see any), but that passenger got his cookies!