It’s been all go since my last blog – let me start with Civitavecchia.

I have been to the port of Civitavecchia many times and visited Rome 7 years ago in the summer season, so needless to say I was in no rush to do it again. Instead, I opted for a tour to Tivoli and Villa D’Este. The town itself was quite quiet, which was perfect as it allowed for great photo opportunities. We had a brief introduction from our local guide before heading into the villa and out of the scorching summer sunshine. The villa itself was very nice both inside and out, and the artwork  was absolutely magnificent. There were also several costumes from famous events and movies – one being a clown type outfit worn by Pavarotti. We went from room to room and admired the artwork while our local guide gave us information on the paintings – the majority of which had been there for hundreds of years – and occasionally we caught a glimpse of the gardens and incredible views from the open windows. I enjoyed the villa, but it was the gardens I wanted to see, so when our guide said it was time to go outside I was out of the door like a rocket. I hadn’t actually realised that the gardens are a UNESCO World Heritage Site and it was easy to see why. They were on 3 levels and there were water fountains at just about every turn. All of the fountains are powered by nothing more than water pressure and the gardens as a whole have remained unchanged for 500 years – I thought that was incredible! We were looking at something in the exact same form that others had also looked at all those years ago. If I remember correctly he also said that the pipes were original. It really was a fantastic place to visit and I would highly recommend it. After our tour in the villa and around the gardens we went to a local restaurant for lunch before having an hour or so of free time. 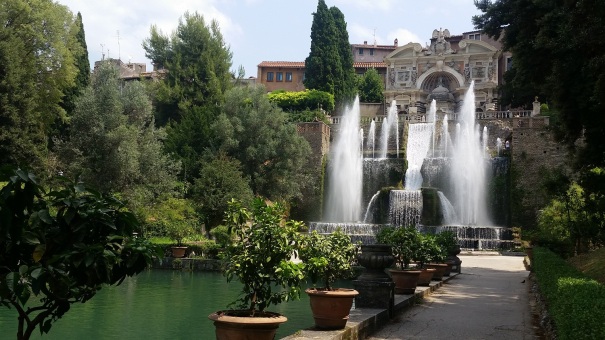 Livorno was our next port of call and I had decided to just explore the town instead of going on tour. I have been to Pisa before and would like to visit Florence one day, but at a slightly cooler time of year. The last time I went into Livorno town centre it poured with rain all day and aside from the supermarket and a few restaurants, everything was closed. I left the ship and hopped on the shuttle bus in time for the shops opening. It was another hot day but we had a cooling sea breeze – perfect weather for wandering around town. I didn’t buy much, just a pair of shoes, but my friend and I did stop at Il Ventaglio Pizzeria for pizza and a drink. I had lunch at the very same place a few years ago and decided it had to be done again. The pizza is fresh, the staff are a lovely bunch and the prices are very reasonable: 3 euro for 3 square shaped slices of Margarita and a drink. I had Pepperoni on my pizza though so mine was 3.50. The restaurant is on the main shopping street, you can’t miss it. There was also a massive market in the centre of the city selling fresh fish, vegetables and fruits, and various items of clothing. I had a walk around for a little while and popped my head in the indoor market. If you visit then check to see if it is on or not because it is definitely worth having a look around. After lunch I made my way back to the ship, got changed and enjoyed a few hours on deck in the sunshine.

A day at sea followed Livorno and it was wall-to-wall sunshine, although there was a strong breeze across the open decks. It was also Mediterranean BBQ day! Everything was set-up and as usual there was a never ending array of food choices. I really do enjoy the BBQ’s on this ship and I think we have had a BBQ/Grill on deck almost every day since July 3rd. On the menu was steak, fish, sausages, pasta with several sauce options, gammon steaks, turkey steaks, vegetables, cold meats and seafood – you name it they had it! There was even a Leaning Tower of Pisa made entirely out of bread!

Barcelona came next and it was a very busy day in port. There were cruise ships for as far as the eye could see, but we had a prime berthing location right behind the World Trade Center – perfect! I left Saga Sapphire behind and jumped in a taxi to the Barcelona Zoo. It was early when I got there and quite quiet, exactly what I was hoping for. The Zoo isn’t huge, but it’s certainly big enough to fill a day. The animals there include: elephant, giraffe, lion, brown bear, tiger, hippopotamus, zebra, ostrich, cheetah, warthog, sea lion, dolphin, orangutan, meerkat, camel and white rhino. I really enjoyed it and it allowed me to see an elephant (my favourite animal) for the first time. Had it not been so hot I would have stayed longer than I did, but by noon it was starting to get quite busy so I made my way towards the exit and back into the city centre. I decided to walk back along to Las Ramblas instead of getting a taxi, it wasn’t too far, but my feet were aching from the heat by the time I reached the bottom of the famous street. I stayed in town for around an hour before making my way back to Saga Sapphire for some much needed air-conditioning.

Yesterday we were in Valencia and my tour was to the Caves de Sant Josep. They were absolutely magnificent! I’ve never seen anything like it in my life. The outside air temperature was around 34 degrees Celsius, so having a boat journey through the caves – which are naturally around 18 degrees Celsius – was very well received. We started the journey by boat before doing the walking section and re-joining the boat for the ride back to the beginning. I would definitely recommend this tour, but note that you can’t take any photographs and the boats are wooden, it was quite an experience getting in and out!

Last night I dined in East to West again and for main course this time I decided to try the lobster – it was INCREDIBLE! I only recently started eating lobster, but have tried it several different ways and with various sauces but the one I had last night – infused with lemon grass, coconut milk, mango and saffron – was by far the best! I will be going back for more before this cruise comes to an end.

We are at sea today and tomorrow and today has been another incredibly hot one! No breeze at all and the thermometer hit the 37 degrees Celsius mark – it’s fair to say I was literally melting for a while and had to come inside to cool off and breathe. I did check out the Spanish BBQ though (obviously) and the Paella looked AMAZING, everyone that did try it has said how good it was. I would have tried it myself, but I was just so hot and bothered that the most I could stand to eat was a simple ham sandwich. 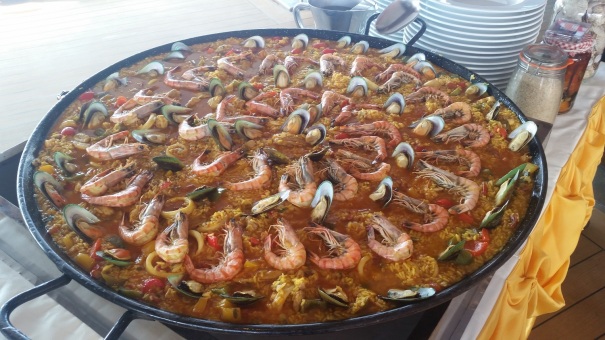 I want to use this blog to also mention my cabin steward, Felix, because he has been brilliant! Everything he does is clearly done with thought and care and he always goes that little extra mile. Every night when I return to the cabin my pyjamas have been taken from under my pillow and are laid out across the bed waiting for me, my pillows have been fluffed to within an inch of their lives and my sandals have been arranged in pairs neatly on the floor. Now I know the majority of cabin stewards on other ships also do the above, but Felix does it with thought – making sure the design on my t-shirt is perfectly visible in his folding technique. A few days ago my friend left her cardigan hanging over the chair and when we came back to the cabin it had been put on a hanger and was hanging on the wardrobe door. Little things like that make a big difference and we have certainly noticed them!

The dance hosts on this cruise are also very good, every sailaway they are up on deck doing what they do best and the ladies seem to love them. A very pleasant group of chaps indeed and they always take the time to have a little chat when passing me in the Drawing Room.

I will check back in with you all again very soon!