More Ports Of Call, A Calm Biscay And Disembarkation

It’s been a while since I last checked in with you! Unfortunately I couldn’t get the ship Wi-Fi to soak up enough juice to power my blog so had to wait until I returned home before I could bring you more content. I know you are thinking the same thing, the cruise flew over! It really did! So sad to be back to reality, but all good things must come to an end as they say.

I think last time I left you on Morocco so I have got some catching up to do!

After Morocco we visited Cadiz, Malaga, Gibraltar and Lisbon. During our call to Cadiz we decided to take a trip to Seville and what a trip it was. Such a beautiful place! I would recommend it to everyone. Cadiz itself is very nice, but Seville just had a little extra in the way of history and architecture. It took an hour and 30-minutes to get there, but it really was worth it. We walked all over the town, done a little bit of shopping (obviously 😉 ) stopped for some lunch then had a casual stroll back towards our meeting point. It was all at a slow pace which was perfect, it’s nice to escape that big city atmosphere now and again, yet still remain within a bustling and exciting town centre.

Malaga was a port I had also visited previously, but this time we went ashore with a group of people we had become friends with onboard. We just walked, stopped for a Carajillo which is a traditional Spanish coffee with either brandy, rum or whiskey, walked some more then stopped for another drink and made our way back towards the shuttle bus. It was nice because we didn’t bother looking at a map, we didn’t rush either we just went with the flow, took our time and occasionally popped our heads into a few shops and the odd church we passed. It was a lovely day and it took me through many areas I had never explored before in Malaga.

Gibraltar was as always our shopping explosion, however we docked at 8am on a Sunday morning and a lot of the shops didn’t open 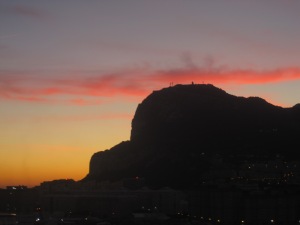 until about 9.30am. Doesn’t seem too bad really, but given the fact we had to be back onboard the ship by 1pm, it really didn’t leave you enough time to enjoy it properly. There were a fair few unhappy passengers that day I have to be honest. A lot of people had never been before and were thoroughly disappointed that they would only have time to do either an excursion or some shopping, they literally had no time to even try and squeeze in a little extra. Once back onboard the unhappy faces started letting go their tongues and expressing their disappointment which I could fully appreciate to be honest. It was my fifth visit to Gibraltar and I am yet to have a full day’s call there.

There was a running joke on the ship too that between Malaga and Gibraltar the seagulls had been flying backwards. You see Cadiz, Malaga and Gibraltar are literally a stone’s throw away from each other. We sailed so slow overnight between each of these ports we were convinced the birds were flying backwards. We all said it would have been so nice to have stayed in one of the ports until late at night rather than ushering everyone back onboard to sail a journey of roughly 12-hours that could in reality probably be done in about 2!

Lisbon was our final port and what a gorgeous day it was! Probably the warmest of the cruise and I had expected it to be the coolest. I have visited Lisbon several times and as a whole I am not a massive fan. I would like to go one day and explore further afield, maybe leave the city entirely and be taken to somewhere I can truly fall in love with because Lisbon as a city just doesn’t press my buttons i’m afraid. I did get the shuttle into town though for a short stroll. My friend had gone ashore with our group of friends and I kind of decided last minute I would head off on my own for half an hour and that literally was it.

We had two days at sea before reaching Southampton and they were rather pleasant days too! A little movement on the Tuesday, but barely a pitch on Wednesday. The Biscay was not only calm but actually surprisingly warm too. It was a lovely day at sea.

Overall the cruise was a lot of fun. It just went over too quick! The food was delicious, the staff on some occasions hilarious and we made some great friends. It started off incredibly sad, but as the days went on the mood onboard started to lift and life was brought back into one area in particular that for days was empty of positive emotion.

I have no complaints about the cruise, I always enjoy my time with P&O and I can’t wait to go again. There were a few complaints 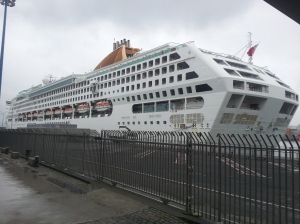 made in conversation from other passengers though, the biggest one being the length of time we had in Gibraltar and that we could have easily had longer in at least one of the ports because they were so close together.

Disembarkation was super fast yesterday. My friend and I were down to head to our meeting point, Footlights Theatre, between 8.35 and 8.55 am. We arrived at 8.40 only to find that our section had already been disembarked! We made our way towards deck 5 and left the ship, grabbed our bags and made our way towards our coach. Possibly the fastest disembarkation I have experienced to date!

Over the next few days I will be bringing you some exciting blogs so watch this space! 🙂