The next morning we awoke to find ourselves winding our way down the even more spectacular Geirangerfjord. As promised by the officers in Flam, the sun was still beating down on the ship with only the occasional wispy white cloud obscuring the perfect blue sky.

Another perk of being in a suite was the invite we had to the helipad deck sail-in party. From there the panoramic vista was completely uninterrupted all around, with wall to wall views of the mountainous rocks towering over us. The fact that it was also a chance to mingle with officers and other crew whilst sipping either a hot chocolate or early morning glass of champagne, was an added and welcome bonus. Standing on the helipad gave a true sense of perspective looking up at the huge rocks. Even on a 122,000 GT, 1033 ft. long leviathan of a cruise ship, we felt small and humbled by nature in all its magnificent glory.

If Flam is beautiful, Geiranger is simply stunning. It’s fair to say there’s not much in Geiranger but a wealth of excursions are available either 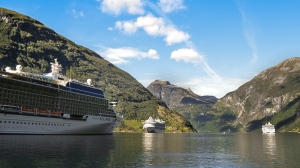 from the ship or to book ashore at the tourist office or other stalls in the village. Open top and hop on, hop off bus rides, boat trips, kayaking and even a flight in the aforementioned helicopter are all readily available. However, we opted to spend the day just wandering about taking in the sensational scenery and weather.

We walked a little way up a winding mountain road to an old church and sat for a while in the grounds looking down on the ship and village below.  We sauntered back through the village looking around the tourist shops and cafes before having a stop for an ice cream in the warm sun and then headed off around the other side of the bay. We found a beautiful mountain stream flowing down from a waterfall high above. The water was so clear and pure you could probably drink it. The water was icy cold and refreshing but I somehow resisted the urge to go for a paddle! Eventually we reluctantly headed back to the ship with a cool shade being cast over the village as the sun disappeared behind the mountains. We’d had the most perfect day and were exhausted, but in a most satisfying way.

With our sail away being so late and the sun setting, the mountains took on an eerie aura casting dark shadows over the ship as we sailed under them. The downside of enjoying such fine weather was that there weren’t anywhere near as many big waterfalls as we’d seen last time and the normally magnificent Seven Sisters went by unnoticed. It didn’t really matter as the sights were still truly captivating. Stood on the deck outside the gym we were mostly on our own soaking up the tranquil atmosphere as we sailed away through the twisting narrow fjord on our way to Alesund…………………

Categories
Recent Posts
My Tweets
Instagram
The beauty of Bolette at night. Absolutely love this ship! ⚓️🚢❤️🥰
I live for these moments and I miss them so much when I'm not at sea. ❤️🚢⚓️🤗🥰
Follow CruiseMiss Cruise Blog on WordPress.com
RSS Links
Loading Comments...
%d bloggers like this: