I can honestly say with hand on my heart that I am not a taker of the mick when it comes to sun loungers. The longest I ever leave the lounger for is 30 minutes and it’s usually to either grab something to eat or simply give my legs some exercise for a moment. Sun loungers cause more arguments than anything else at sea (aside from the laundrette) and I for one can’t be bothered with the aggravation. If I am going to leave the lounger for a long period of time then I remove my things so someone else can use it, simple as that! I wouldn’t like someone to do it to me therefore I don’t do it to others.

Although my story is not exactly about sun loungers it does follow along the same route and is a gentle reminder that manners cost nothing.

On my last cruise my friend and I awoke quite early so made our way to the back of the ship (we had spent our time thus far mid-ships so fancied a change of scenery) to find some sun loungers. There were more than half free but not ideally placed for us so we opted to sit at the table instead and just relax on the wooden chairs. We both sat down and placed our towels on the other two remaining seats and put our feet up. There were no problems for people finding seats or loungers and had there been then obviously we would have removed our things and gladly offered the seats to someone else. We are both thoughtful and considerate human beings and will gladly adjust our seating arrangements to accommodate someone else. The more the merrier, let’s all laugh and have a good time, that’s our type of attitude.

We had been sat quite peacefully for roughly 45 minutes when two older ladies came walking around the deck, by now the deck was getting quite busy and I thought to myself we should really put these chairs back now so someone else can use them. As quick as the thought came into my mind one of the women approached us, looking at us like we were utterly disgusting human beings and threw out ‘do you really need those chairs for your feet’. As she finished speaking she continued to stare down at us like we were monsters so I simply replied ‘I am sorry but we are actually waiting for someone, she is en-route from her cabin now’. She gave us a look of disgust and walked away.

My friend and I turned to one another and both shook our heads. The problem for us was not entirely what she had said it was the 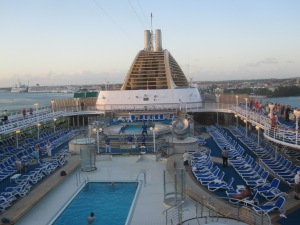 manner in which she had said it, I really can’t describe to you the disgust on her face towards us. Had she simply said ‘excuse me girls can we use these chairs’ then I would have happily not only given them to her but moved them to where ever she wanted them on the deck but, because we were both spoken too in such a manner we decided she could sweat it out for five minutes.

Technically we were waiting for someone but we didn’t know for sure if she was coming so it was only half a lie that I had told, surely I would be forgiven for that.

We waited a few minutes and by now I was believe it or not starting to feel guilty. Yes! She was rude yet I was the one with the guilty conscience. I said to my friend another 2 or 3 minutes and I’ll tell her our friend is not coming and that’s exactly what I did.

I approached her and said our friend is staying at the forward end of the ship so please feel free to take the chairs. Her attitude changed entirely, it was like she were our long lost grandmother. The transformation was truly amazing. Even her friend smiled and made conversation.

I had no ill feeling or attitude towards this lady, we happily sat and had a conversation afterwards but my point is that it costs nothing to have some basic manners. I would never approach someone and talk to them the way she did us and when I am on board I will gladly do anything for anyone. In fact just a few days later my friend went out of her way to help a lady find her husband, although it turned out he was where she had left him in the first place she was clearly a little disorientated and thus followed the trek of the ship.

So please people don’t hog the sun loungers and refrain from getting too stressed over the chairs. More often than not you will come across people like my friend and I who will…… I was going to say bend over backwards but I would probably seriously injure myself trying to do that so, let’s just say we will happily move for you or if need be we will go and find a chair for you and place it where ever you would like it because, we are nice like that and it’s really no big deal! 😉