Being back on dry land for a few weeks has now made me realise that booking a five week cruise probably wasn’t the brightest idea I have ever had, because now I have the worst cruise blues, ever! Actually I wouldn’t even call them cruise blues I think the more appropriate thing to say would be that I feel kind of homesick! Home doesn’t actually feel like home anymore, I left that behind in Southampton.

It’s such a strange feeling especially as I not only miss just being at sea I miss the annoying aspects of life on a ship too like being woken up by the thrusters as you dock in yet another foreign land. I miss the people, the atmosphere, the motion of the ship…..you name it I MISS IT!!! I think the only thing I don’t miss aside from the prawns is the food. It was definitely nice to come back and not eat as much.

During a previous cruise I had a conversation with one crew member and it always sticks out in my mind. I asked him if he enjoyed his job, you know, the usual run of the mill questions. He said yes but then followed with I no longer like going home though, I miss the ship and at home I can’t sleep because my bed is so still. 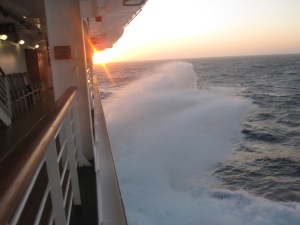 onboard for more or less eternity. Either that or the cruise lines put something in the water!

I was heading into town last week, I boarded the metro and I sat looking at the people around me, making their daily commute to work. They all look the same in dress plus most of them miserable and all of them cold. I couldn’t help but think to myself, there really is an entirely different world at sea and it must be great to wake up in the morning and only have to go up a few decks in order to get to work. It made me realise how monotonous some of our lives can be but that sadly for a lot of us there is no other choice.

I can’t even watch the adverts on TV now that have anything to do with cruising. I love the Royal Caribbean Advert that has been making the rounds for the last several months but it’s the shot of the ship at the end that makes me twist my face up every time because I wish I was out there too!

I am more than aware of the fact I probably sound like a crazy person but hopefully some of you will understand where I am coming from!? Some people would say cruising is an addiction and it is I even said it myself! But now for me I think I would say it’s not cruising that is the addiction as such, it’s simply just being at sea and seeing life from another and completely different  point of view, that’s an addiction I don’t think any of us would want to go to rehab for! 😉

For now I remain homesick, but I shall wait and see what my future holds……………