We arrived at Ocean Terminal around 1130 and were happy to see that although there were quite a lot of people starting to turn up, it wasn’t too busy. We pulled up at the drop off point and were greeted by a cheery baggage handler who happily fetched our cases from the boot and loaded them on to his trolley. We headed straight in to the terminal and were given a check-in/embarkation card with the letter ‘P’ on it. This was new to us, normally around the corner at City Terminal it is just a free for all at check-in. We were happy to see that ‘J’ was currently being called and it was only taking 5 minutes per letter. Sure enough, we breezed through check-in and made it on-board in just over 35 minutes from arriving in the terminal.  Almost as fast as with priority check-in on our previous cruise.  The staggered combined check-in and embarkation worked well and was a good start to the day.
Once on-board Ventura, we were directed to the Waterside buffet restaurant. This was already quite full and we struggled to find a table. But we sussed out straight away that the Beach House at the far end of the Waterside was available for seating and not crowded. However, there weren’t any open food stations there. So we parked our hand luggage and set off in search of some food. A light snack and drink was in order and then it was off to explore the upper decks which were considerably quieter than the buffet. We found a nice quiet spot up on the top deck, parked ourselves again taking in the warm sunny weather and the view.

Cabins were ready shortly after the estimated 2pm, so we headed down to deck 12 to drop

our bags off and get acquainted with our accommodation. We had a balcony cabin on Australia (12) deck, fairly near the front with a good view over the side and along to the bridge wing where we could see officers and the Captain preparing for departure. The cabin itself was cosy and adequate. It was maybe a little dated in its décor and fittings for our taste, but was OK really. The only problems we found were that the drawers in the bedside cabinets were very sticky and difficult to open or close. Also, there didn’t seem to be any cold water coming from the tap! We reported this and assumed it was just a problem with the tap mechanism itself. We later discovered it was a common problem and not one that got fixed. We never heard any more from Reception or the maintenance department about it and opted to bring water back to the cabin every night from the buffet.

We sailed away in convoy behind Celebrity Eclipse but in front of Oriana and Grand Princess.  There was much waving and horn blowing as we went by Grand Princess and I was rather envious to see they were showing the football on their big pool side screen! We did have it on in some of the bars though, but in reality my wife would probably have strung me up from the main mast if I’d suggested going to watch it!

As we made our way along the Solent, we enjoyed a mid afternoon snack of burger and chips from Frankie’s and sat outside at Breakers Bar watching Portsmouth harbour and the Isle of Wight go by. 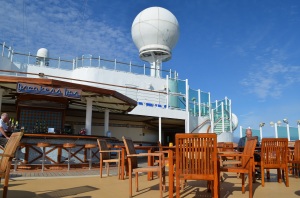 We later spent the early evening exploring the ship, trying to get our bearings. It was a bit confusing at first but once we’d visited every location it started to gel a bit more…. well for me at least, but not so much my wife!  Most areas were quite quiet at this time and we had a really good look around and found some lovely spots such as the Terrace Bar and pool high up on the aft of the ship. Despite the sail-away weather being sunny and warm, this pool was empty and covered by netting.

For dinner we opted for the Beach House restaurant. It is a service restaurant but you can’t book. You turn up and if there’s a free table they will seat you straight away. If not they give you an estimated time and a beeper. The system seems to work and we soon had a table. The restaurant serves slightly plain food, such as burgers, fish and chips, pizza, steak, sizzlers, as well as a curry. The food was ok. Perfectly adequate but nothing extraordinary.

Following dinner we decided to check out the theatre show; Destination Dance. The

theatre itself is a pleasant, functional style arena, but lacked some of the glitz, glamour and wow factor often found in the West End and mimicked so well on some ships. The views were mostly pretty good though, as there are no obstructing pillars. However, if you want to see the performer’s feet and lower legs, I would suggest not sitting in the stalls in front of the stage. There is a big lip to the edge of the stage, presumably to stop performers falling off in rough weather!  The volume of the pre-show backing music was piercingly loud through very tinny speakers. This didn’t improve with the show itself and was one of the reasons we had to leave before the end as it was giving me a headache. The performance was ok but the dancers didn’t seem particularly together. The music was loud, repetitive and actually rather annoying! For example the first performance was trying to recreate the Rio carnival atmosphere and all the way through the song there was whooping, hollering, whistles etc over the singing. A similar problem with Country & Western segment. Whilst the GI Joe American part had “hut, two, three, four” shouted from start to finish, drowning the other vocals and backing music out and it continued literally non-stop throughout the whole song.

A late night stroll around the upper deck and then again down on the promenade deck on 7 rounded off the evening, which was most pleasant. Oriana was still holding a watching brief off our starboard side, providing a pretty backdrop all lit up like a Christmas tree.

It was great being back on-board on another cruise so soon after our recent Mediterranean jaunt and that familiar gentle rocking motion sent us off to sleep nicely.