Day at Sea and the Gibraltar Approach – Day 2/3

Day 2 was finally the start of the weather starting to calm down. Although not exactly red hot the sun did briefly come out and it was pleasant walking around on the open decks (when the wind didn’t blow you off your feet of course) we were finally on our way into the warmer waters and the holiday had begun! People started to emerge from their cabins, beginning to recover from the weather the day before, it was generally busier around the ship and finally there was noise and atmosphere. 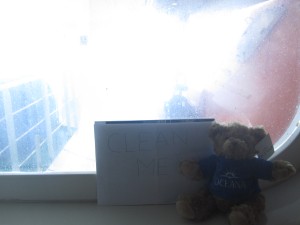 really had ourselves a lazy day until it was time to get ready for the evenings party and of course food. I was also praying that the following day would bring a window cleaner to my cabin as I was struggling to see out the glass since our “eventful” crossing……..amazing that I am on holiday and at that moment my biggest concern was the window being cleaned!! – No I don’t understand myself most of the time either.

After we acted like typical women and messed around with our hair and make-up for what felt like an eternity we were finally ready to leave our cabin and join the cocktail party. It never lasts very long but it is a great sight, everyone gathers in the atrium, decks 5, 6, 7 and 8 mainly. The captain makes a little speech and introduces members of his team including the deputy captain, executive chef and executive purser; everyone in general just enjoys the atmosphere and the sight of all the formal attire.

Day 3 we were heading for Gibraltar, we only had an afternoon call here anyway but we were running slightly late. Because of the weather the ship had slowed to just 14knotts so we were about an hour or so behind schedule, still, the sun was shining so everything was OK. 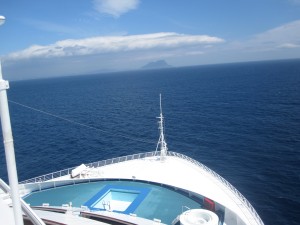 You can just see the Gibraltar Rock in the distance

As we approached Gibraltar the wind started to pick up again, docking seemed to take a little longer than usual but we got there. It had clouded over slightly but after an hour or so on the main shopping street the sun was well and truly shining once more! Gibraltar is one of those places that that I always wish were a longer visit. It is fantastic for shopping, everything is incredibly cheap here but an afternoon or morning call only gives you time to do one thing or another. I would love to go up the Gibraltar rock one day and then still be able to shop. Instead I keep opting for the latter every visit and I am beginning to annoy myself, no will power what so ever, the shops win EVERY time!

We headed up the main shopping street, being deafened in the process more than once by what looked like fighter jets? The noise was incredible, I actually at first thought it was some kind of explosion. There were 2 flying together and they went over us maybe 4 or 5 times before they eventually I am assuming landed or flew off somewhere else.

As we dragged ourselves back to the ship, ten thousand bags in tow I was starting to lose the will to live. I could no longer feel my feet, I felt uncomfortable and all I wanted was to sit down with an ice cold fanta………..I just needed to go a little bit further and I would be there. After literally dumping our bags in our cabin and a quick freshen up we headed up to Lido deck, the sun was shining and we were meeting friends of ours for dinner. These friends I might point out didn’t even tell us they were going on the cruise. They surprised us once we were on board which really did make my day!!

If you are planning on visiting Gibraltar via cruise ship then try and walk to the main shopping centre if you can. There is a taxi service which is I think 3 euro per person return but the walk itself is only maybe 15 minutes and is actually quite pleasant. By the time you stand waiting for a bus (which is pretty small) you could have been there, just a friendly mention if you are able to walk then do so, it can be much quicker. 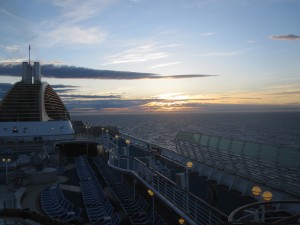 View from the Pennant Bar on Deck 15

We left Gibraltar and headed back out into the open ocean, that night it was quite pleasant, the wind was still a little brisk but overall the outside temperature was ok. I decided to take an hour for myself and head up to the Pennant Bar on deck 15. I knew the bar itself would be closed and to be honest that’s why I like to sit up there. It is so quiet, very few people venture up there of an evening unless they are just having a quiet wander, like myself.

You get a great view as you can see from the picture and on this particular night P&O Cruises smallest ship Adonia sailed past us. It was a great sight, the sun was just setting and this little white ship was gleaming under the reddish sky. As she got alongside they flashed all her aft outdoor lights off and on, I am assuming as a way of greeting us because they couldn’t exactly blast the horn now could they. Not entirely sure if Oceana responded but Adonia had a little light party all her own. 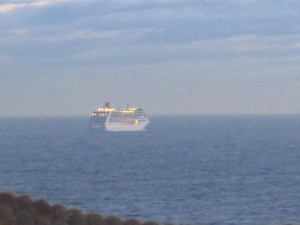 It was time now to sit and relax, a few drinks before heading back to the cabin and getting a good night’s sleep ready for our call tomorrow in Cartagena………………

P.S. As if by magic my cabin window was cleaned whilst I was out exploring in Gibraltar. Someone must have felt the vibes 😉

I would also like to take this opportunity to apologise to P&O Cruises and my fellow passengers if there seemed to be a shortage of walnuts on board. This is down to the fact that I kept stealing every single last one from the dry fruit next to the cheese and biscuits and when that was not enough I asked for a bowl of them from the kitchen……I did however find these lovely fresh ones for you P&O, I just couldn’t be bothered to drag them back to the ship 😉 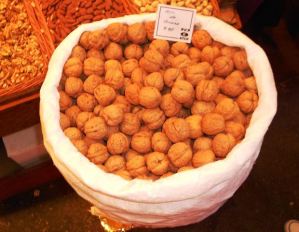 Walnuts to replace the ones I ate!!!

Video 2: Some Reassurance From The Captain – Be sure to watch this video at about 1 min 20 seconds. You can hear a rather large wave hitting the hull.