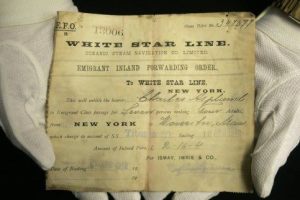 I am going to continue on with the Titanic theme today, sorry folks, I know some of you would rather I left the subject alone but I can’t help myself so just be patient with me until it passes.

TV is bursting at the moment with drama’s and documentaries about the ill fated ocean liner and I don’t know about you but I can’t stop myself from watching them. Every time I do I learn something new and I think that’s what keeps drawing me in.

I love to learn, the more knowledge the better, all be it most of the time I am full of pointless, useless information but sometimes I know a good thing or too. With that in mind I want to go over some “facts and figures” about Titanic that some of you might not know. I didn’t know some myself until recently.

The fourth funnel on Titanic was in fact a dummy funnel, used for nothing more than storage and ventilation. The fourth “smokestack” was added to create a more impressive look to the vessel, same goes for sister ship Olympic.

Isador and Ida Straus, two first class passengers occupied one of four parlour suites onboard, cabins C55-C57. On top of the mantle in the couple’s suite sat a bright gold coloured clock. To this day that same clock still sits on top of the mantle (see below image)

There were and still are conspiracy theories that argue it was not Titanic that sank, it was in fact her sister ship Olympic. People believe Olympic was disguised as Titanic and sunk deliberately as part of an extravagant insurance scam

That’s your Titanic history lesson for the day, there really are so many other facts you could learn about RMS Titanic but I just wanted to share with you a few of them. Below is an awesome video I stumbled across and thought I would share it with you too, great footage for all you Titanic enthusiasts out there.