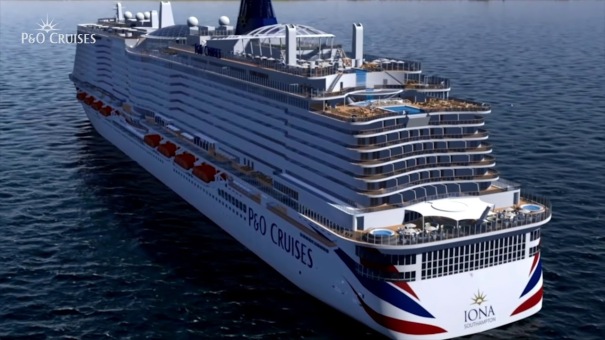 Late departures and overnight stays in iconic destinations are among the key features of P&O Cruises new ship Iona’s inaugural winter season, which goes on sale on Monday March 18, 2019*.

Between October 2020 and March 2021 Iona will sail south to Spain, Portugal and the Canary Islands for winter sun as well as visits to spectacular cities in northern Europe.

Guests will be able to enjoy day-into-night visits on shore to discover local nightlife with late departures from Barcelona, Valencia, Tenerife and Fuerteventura.

Overnight stays in Barcelona, Lisbon, Cadiz and Rotterdam are also part of the mix as Iona sails conveniently from its home port of Southampton.

An exciting choice of hand-picked shore adventures are being developed, ranging from waterfall canyoning in Madeira and river rafting in Vigo, to tuk tuk tours of Lisbon and star-gazing from Mount Teide, Spain’s highest peak, in Tenerife.

Traditional shrimp fishing by horseback in Bruges and cruising canals in Amsterdam on a vintage boat are among other new city-based shore experiences.

A mix of seven and 14-night itineraries will be offered during Iona’s maiden winter season.

Rotterdam (for Amsterdam), Zeebrugge (for Bruges), and Hamburg are among the northern European cities featured.

Guests travelling on Iona to Spain, Portugal and the Canary Islands could look forward to shore experiences including:

Canyoning in Madeira – an action-adventure in the crystal clear waters and gushing waterfalls of Madeira. A hand-picked adrenalin-fuelled canyoning trip will see guests splashing and sliding down the beautiful river falls or swimming and abseiling in ravines.

Sundowners with the stars in Tenerife – For a truly memorable experience guests will be taken to watch the sunset at the summit of Mounte Teide as they savour a cocktail and dinner designed by two-Michelin starred chef, Erlantz Gorostiza. They can watch the skies darken, ready for magical star-gazing in Teide National Park. The park has the reputation as being one of the top three best places in the world to observe the night sky.

Rafting adventure in Vigo – For an exhilarating experience guests will be able tackle the lively Mino River on a rafting adventure through white water rapids. Along the way they will see some of the most stunning Galician countryside.

Lisbon by tuk tuk – a truly immersive journey through this beautiful city, moving through the streets in an open sided tuk tuk to all the well-known sights and panoramic views. There will also be an opportunity to sample regional food including Lisbon’s traditional custard tarts – pastel de nata.

Trek on a moonscape in Lanzarote – In this unique volcanic landscape guests will enjoy an other-worldly hike. Walkers will get a real insight into the various forms and features of this luna-like scenery with an opportunity to visit craters and see lava gorges.

Guests travelling to Northern European cities could look forward to:

An evening canal cruise in Amsterdam – An exhilarating city-by-night trip on a vintage canal boat.

Discovering Bruges independently – at the heart of this UNESCO World Heritage Site. Climb the 365 steps of the 13th Century Belfort tower for magnificent city wide views, sample a selection of beers at an award-winning brewery and browse the myriad of chocolate shops.

Roam the Reeperbahn – Guests can follow in the footsteps of The Beatles in Hamburg. An evening adventure to uncover where the Fab Four found fame it includes a visit to a cult bar for German Schnapps and a visit to the Ritze, an old cellar boxing club.