We awoke early the following morning and enjoyed a small breakfast in The Palms before heading ashore in a taxi. We shared a cab with 3 people we had met onboard during the cruise and within 20 minutes we were in the Art Deco capital of Miami. It was very windy, so our visit to the beach lasted around 4 minutes – enough time to be sand blasted and take a few photographs. We walked around South Beach for hours, popping our heads in various little shops, admiring the architecture and even grabbing a few pictures outside of Miami Ink (a famous tattoo studio on Washington Avenue) and the Miami Police Headquarters building, which you will probably have seen in many movies and TV shows, including CSI Miami. We also took pictures outside of the Versace mansion. On my visit to Miami last year, the excursion only included a panoramic tour of South Beach, so it was nice to walk around this time and visit the places that I had spotted from the coach last year.

Before we knew it, it was lunchtime, so we made our way to Wet Willies on Ocean Drive. It wasn’t the most impressive looking bar and restaurant on the strip, but it suited us and it soon filled up. Both the drinks and food at Wet Willies were really good. We each ordered the BBQ Chicken pizza and some shrimp and fries to share. The pizza was the perfect size and absolutely loaded with toppings. BBQ flavours are never my first choice, but something in my mind told me to order it and I’m glad I did because it was GOOD! In fact, I had a similar pizza a day or two later from the California Pizza Kitchen and honestly, the version at Wet Willies was much better. My drink was called Triple Play and it was a mixture of Call a Cab, Attitude Improvement and Sex on the Beach – one of those was enough for me, it was too early in the day to stagger back to the ship! As I said earlier, it was incredibly windy during our visit to Miami, but I think had the weather been better, Wet Willies would have been packed and we could have enjoyed dining al-fresco on the balcony.

We sailed from Miami and made our way overnight to Port Canaveral. There are many tour options available from Port Canaveral, but for me, it had to be a day at KSC (Kennedy Space Center). I visited last year and absolutely loved it. I HAD to go back. I enjoyed my second visit just as much as my first (I’ve turned into a bit of a Space geek), but I left feeling like we didn’t quite get to see everything. When I was at KSC last year, we stopped at the NASA Vehicle Assembly Building for photographs and to see some of the small exhibits there, we also drove around some of the launch pads, but we didn’t do any of that this time. It could be because it’s no longer allowed or maybe it just wasn’t an option on that day, but for me, that was the VIP aspect (our tour was called The Kennedy Space Center VIP Experience), which is not what I had this year. Missed places aside, the visitor complex is awesome, it really is! If you visit Port Canaveral then please consider KSC, even the drive out there is pleasant and as an added bonus you can look for alligators!

Jacksonville in Florida was our next port and we had a shopping day planned at St John’s Mall, which is about a 25-minute taxi ride from the ship. We were picked up by Ed from Ztrip at 08:30 and were soon on the highway. St John’s is an outside mall and it wasn’t exactly what we had expected, but somehow we still managed to leave with empty pockets! There were various designer stores, such as Coach, Tory Burch and Louis Vuitton, but we also managed to find a Target, Dollar Store and a few others. Basically, we looked everywhere!

When it was time to leave, Ed from Ztrip was waiting for us right where he said he would be, outside Target. He helped load our bags into the boot of the car (that would be the trunk for my American readers), made sure the air was the right temperature and that we were comfortable, and then he started the drive back to Jaxport. Ed was lovely and if he happens to be your driver when you’re in Jacksonville, then you hit the Ztrip jackpot!

Ztrip is available on apps for Android and iPhone and it’s a great alternative to a regular taxi. It’s not available in all areas in the U.S., yet, but I’m sure it won’t be long before it is country wide. At present, you can use the service in Jacksonville, Austin, Baltimore, Houston, Kansas City, Orlando, Denver, San Antonio, Boulder, Colorado Springs, Phoenix, Tampa, West Palm Beach and Minneapolis. My favourite thing about Ztrip is that you can pre-book your ride, you don’t have to request a car there and then. Ideal, if like me, you are travelling in and out of Wi-Fi zones. The pre-book option means you can have peace of mind knowing that your cab will be waiting for you when you need it. Visit the Ztrip website to read more on how the app works.

Our run of port days ended with a stop in Charleston and we were blessed with warm air temperatures and clear skies. Some of us were also lucky enough to spot some dolphins swimming just a few feet away from the ship as we enjoyed our breakfast. My friend and I wandered around the city and made the obligatory visit to the famous Charleston City Market before I returned to Balmoral to meet in the Neptune Lounge for my trip to the Boone Hall Plantation.

The journey to the plantation didn’t take long and it was surprisingly quite nice. We passed over the Arthur Ravenel Jr. Bridge, which gave us great views across the city and of Balmoral and USS Yorktown down below. Once we crossed the bridge and were driving through Mount Pleasant, I could see exactly how it got its name, it was typical southern America. Our first stop was at the Boone Hall Plantation farm shop, which sounded ideal, until our guide said we would be there for 1 hour and 15 minutes. Everyone on the tour started huffing and puffing, and finally our guide gave in and said that we would only stay for 20-minutes before making our way to Boone Hall. We arrived at the plantation entrance and the sun was bleating down, casting incredible shadows through the branches of the Oak trees that line the main drive to the Hall – it took 200 years for the trees to grow to the size they are today.

My main reason for booking the tour was to watch the Gullah presentation at the Gullah Theatre, but because we had stopped at the farm shop first, I missed the last showing! To say I wasn’t happy was an understatement and I tripped over my bottom lip at least 5 times. Although I missed the presentation, I certainly wasn’t disappointed with the beauty of the plantation. The grounds were simply stunning and you couldn’t help but fall in love, until I reached what is referred to as ‘Slave Street’. I found everything about this section of the grounds incredibly hard to swallow: a row of several, small brick buildings which were home to the plantations slaves. At one time, Boone Hall was home to almost 300 slaves, it was one of the wealthiest plantations in the south, producing cotton, red bricks and pecans. There were many artefacts throughout the grounds, but the one that stood out to me most was a shopping list in the main house. It read like most shopping lists do, if you glanced at it, but it wasn’t until you looked a little closer and realised what the first and clearly most important ‘item’ on the list was: 1 negro girl. My heart sank. To think that these people were thought of as nothing more than a possession, like a cup or a pair of trousers, it makes my heart ache, terribly. 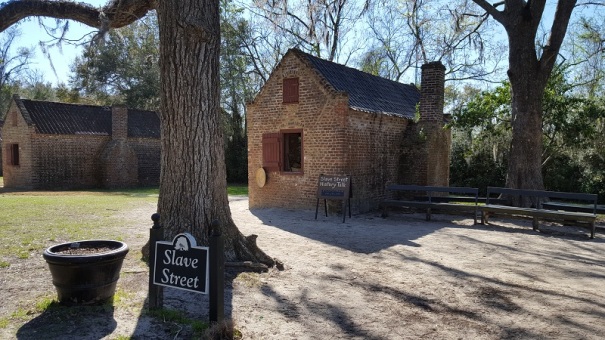 Our tour inside Boone Hall itself only lasted for 30 minutes, but in that time our guide, Ed, really brought history alive for us – he was full of enthusiasm and clearly enjoyed his role. He told us all about the plantation and that the house we were stood inside wasn’t actually the original plantation house. The original property was demolished in 1936 and replaced with what we now see today. This was because the owners at the time – Thomas Stone and his wife, Alexandra – wanted a grander property. Ed continued to tell us that in the 1850’s, Boone Hall used to produce 4,000,000 red bricks per year, using 85 slaves! I can’t even begin to imagine what that kind of work must have been like.

As our stay in Charleston was until 22:00, my friend and I made the most of the evening and had dinner at Fleet Landing – which is a 2-minute walk from the ship. In fact, it’s almost on the dock! The food at Fleet Landing is superb and it’s also a great place to grab a drink. There’s an outdoor terrace – where we sat that evening and watched dolphins playing in the water as we enjoyed our meal – or if you’d prefer, you can enjoy the atmosphere inside the restaurant, it’s entirely up to you. I ordered the Seared Blackened Shrimp to start (pimento cheese grits & sweet corn cream – my third attempt at finding a style and texture of grits that I liked) and the Low Country Boil as an entrée. WOW! The shrimp and grits were amazing, I was hooked from the first mouthful and Fleet Landing restored my faith in that staple southern dish. When I go back to Fleet Landing (because I will), I’ll be ordering it again. The Low Country Boil was also delicious! It’s filled with shrimp, onion, corn on the cob, smoked sausage and red bliss potatoes all of which are then simmered in a lager broth. This also satisfied my taste buds and my tummy, but I couldn’t finish it, I was so full! Please consider visiting Fleet Landing during your time in Charleston. I’ve yet to visit another restaurant specialising in seafood that does it as well as they do! I promise you will NOT be disappointed. You can even view the menu online. 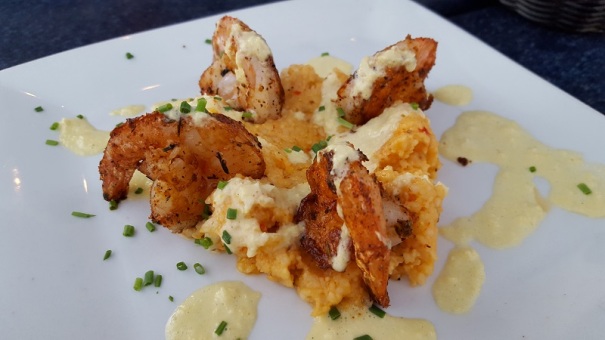 We ended our evening with a few drinks in a pub called The Griffon, which is just a short walk from Fleet Landing. It turned out to be the perfect place to relax and have a drink. The walls are covered in $1 bills and the place has a really friendly vibe to it. The bar staff were welcoming and the drinks were good. The Griffon turned out to be the ideal end to what had been a great day in South Carolina.

We sailed from Charleston a little later than planned and would have 2 days at sea before arriving in Bermuda….

One comment on “Central America And The Mardi Gras With Fred. Olsen Cruise Lines Part 5”

Categories
Recent Posts
My Tweets
Instagram
I live for these moments and I miss them so much when I'm not at sea. ❤️🚢⚓️🤗🥰
#villefranche is one of my favourite ports to visit in #France. I first went there in 2008 and visited again just a week ago, and it's still as beautiful now as it was then! ⚓️🚢❤️🇫🇷
Follow CruiseMiss Cruise Blog on WordPress.com
RSS Links
Loading Comments...
%d bloggers like this: