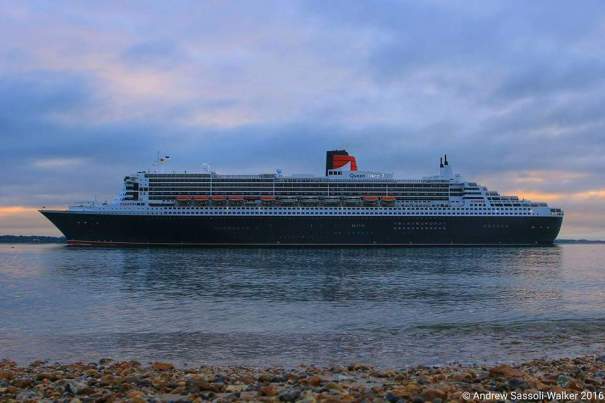 As my two incredible weeks in America came to an end, it was time to once again head for the Brooklyn Cruise Terminal and say a big hello to Queen Mary 2. As much as I love to be on ships, the sight of her on August 9th was bittersweet. I knew she was waiting to take me home, and would bring a close to one aspect of my trip, but I didn’t know at that time what the next week would have in store for me, as I crossed the Atlantic Ocean back to Southampton.

Check-in and security in Brooklyn was incredibly fast, I’d expected a huge queue of people, and in that heat I couldn’t think of anything worse, but it was quite the opposite and the lady that checked me in was so sweet. I wanted to take her with me, but I’m not sure how she would have felt about that. I was onboard and heading for my stateroom in absolutely no time at all. 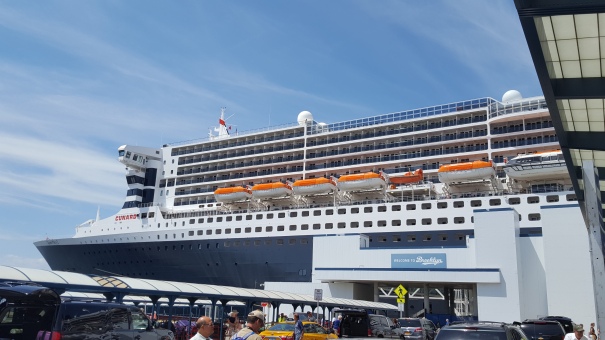 For this crossing, I had a single outside stateroom and when I opened the door, I was gobsmacked. Beautiful décor, lovely bedding, huge windows and a bathroom that had a massage power shower. The stateroom was twice the size that I thought it would be and I certainly hadn’t expected windows as big as they were, or two of them for that matter. I really did like it and felt very spoiled. If you are a solo traveller, then I highly recommend that you speak to your travel agent regarding the solo staterooms on Queen Mary 2 before you book your next cruise. My room was nestled down a little section of Deck 3 – right next to the Britannia Restaurant at one end and straight into The Queen’s Room at the other. There were only 6 cabins on this section of the deck and there are closed doors at either end, so it’s rather quiet as a lot of people don’t realise it’s a public access route. I must say though, I heard 2 ladies conversing as they walked down the corridor one day, one said to the other “oh, I wonder if this is where the people that live onboard stay”. I didn’t hear what her friend said but I was tempted to open my door and say “yes darling, that’s correct” – maybe next time! 😉 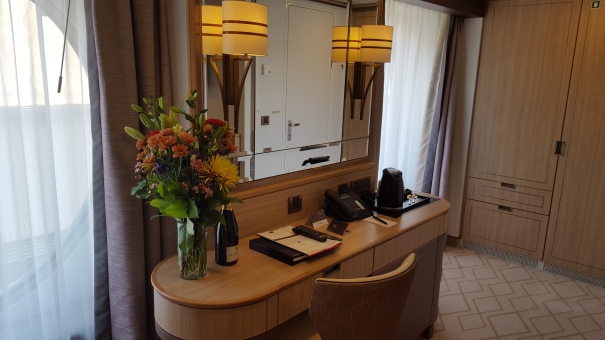 I sat down on my bed (which was bigger than a single but smaller than a queen) and told myself this week would be all about some much needed rest, writing and enjoying all of the sea days with my book. Oh, how very wrong was I!

My heart felt quite heavy to be leaving America and TravelShopGirl behind, so I took myself up on deck to enjoy the pre-sailaway festivities. It was then that I met a young couple from the UK whom had also just finished a U.S. road trip and had decided to sail back home instead of flying – we had something in common straight away! An hour after that, I got talking to an Australian lady and her son, she told me that they (her husband, son and herself) had left Sydney on a 24-night cruise to Los Angeles, they’d then driven across America and here they were, aboard Queen Mary 2 heading for Europe. Basically, they hadn’t been anywhere near an airport and I loved the sound of their adventure! Another set of people that had my way of thinking. Needless to say, we would become great friends and our little group blossomed into an army day by day.

We left New York with an NYPD helicopter escort and minute by minute the Manhattan skyline got smaller. Finally, we were heading right out to see and the sunset was stunning – I could have sat there for hours just watching the sky changing colour. Moments like the one shown below, for me, are absolutely priceless. You could have the best entertainment in the world onboard, but Mother Nature and her blessings will pull me in every time. 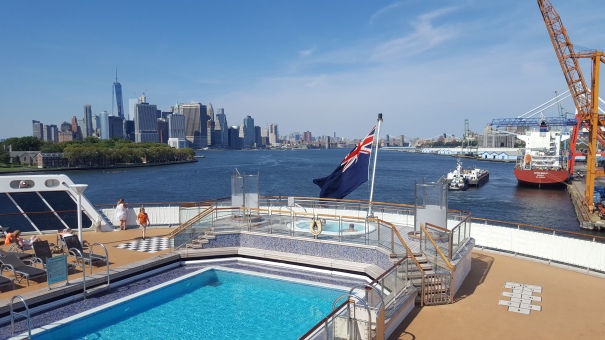 I was on Deck 3 in the Britannia Restaurant for dinner during this crossing, again on a table for 6 (although they squeezed an extra place in and made it 7, but there were only ever 6 of us). There were 4 single ladies – I know, I had that same urge to start singing like I was Beyonce – and 1 couple – a husband and wife. It was another nice mix of people and I looked forward to dinner, although some nights I did venture into the Kings Court instead – I like a bit of variation in my venues. The food in both restaurants was just as good as it had been on the westbound crossing and there was equally as much choice. I didn’t see a single dish eastbound that had been offered on the westbound. I ordered quite a lot from the CanyonRanch section of the menu on this crossing and there was one dish that was so incredibly simple, but it hit every taste bud in just the right way – Sauteed Garlic Shrimp with Wilted Spinach and Jasmine Rice. I also recommend the pan-seared Orange Roughy, I’d never tried it before and aside from it being a fish, I had no idea what it was. It turned out to be my overall favourite dish of the trip! 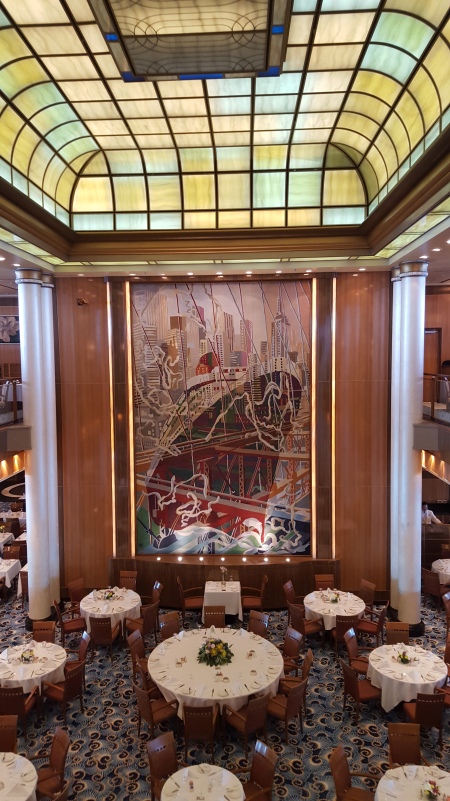 After dinner, on the first night, I met up with the Australian lady and the British couple I’d met earlier in the day, we spent the evening in G32 – Queen Mary 2’s onboard nightclub – and that would be how virtually every night of my crossing would play out. I’d never imagined for one second that I’d meet so many people in such a short space of time and that we would all instantly click – it usually happens on the last day or two and you spend the rest of the cruise all saying that you wish you’d met each other sooner. I think by the end of the cruise there were around 16 of us and they included Brits, Aussies, Americans, Mexicans, Italians and a few Scots.

Unfortunately, I didn’t get to enjoy the Planetarium on my eastbound crossing, which disappointed me. The movies playing were the same ones that had been showing on the westbound, as were quite a few of the movies that were offered in the cinema, so instead of my space fix, I enjoyed the fresh air and my book on the open deck, or I sat in the comfort of my lovely stateroom, writing. 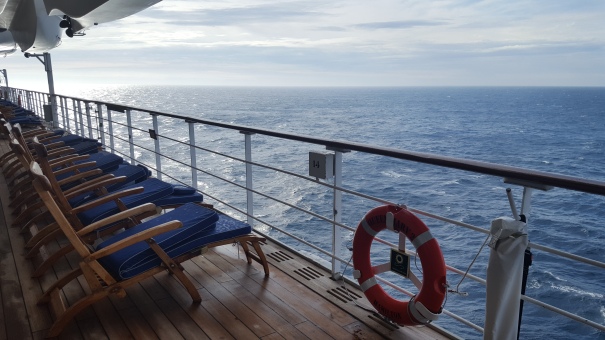 I purchased a soft drinks package on this voyage, something that hadn’t been offered to me on the westbound, which including the service charge of 15% was roughly $53. I really like pineapple juice and could easily drink it by the bucket full, so I thought the safest option was the package. It also included other juices and soft drinks such as Coke and lemonade. I think in all I saved around $40 – so it was certainly worth it.

I’ve had a lot of people tell me that they didn’t realise you could do a trip like the one I have been blogging about with Cunard (including at least 5 people who have now said they are going to do it themselves) and that’s exactly one of the reasons I decided to highlight every aspect of it. Unless you book a transatlantic roundtrip voyage (with maybe 1 day in NYC) your voyages are completely separate bookings, which means you can do whatever takes your fancy – you don’t need to just go straight there and come straight back again! For my fellow Brits, an ESTA allows you to stay in America for up to 90-days in one trip, so you can book your Cunard westbound, travel wherever you wish in the U.S. and then sail back on your eastbound. The middle of your trip has nothing to do with Cunard, you can set this up yourself, but it means you can sail there and back, and have an extended stay in the middle, should you wish. I simply browsed the transatlantic crossing options and noted down what would work best for me. It just so happened that there were 2 which allowed me 16-days in between and that was perfect. There were some crossings that would allow 5-days in between – if you just wanted to visit NYC and go shopping – and some that would let you have up to 89-days, if you wanted to really explore North America. You could even venture further and explore Canada, maybe take a cruise somewhere or head down to Mexico, the choices are endless. If you wanted to have a longer experience, then you’d have to apply for a VISA. 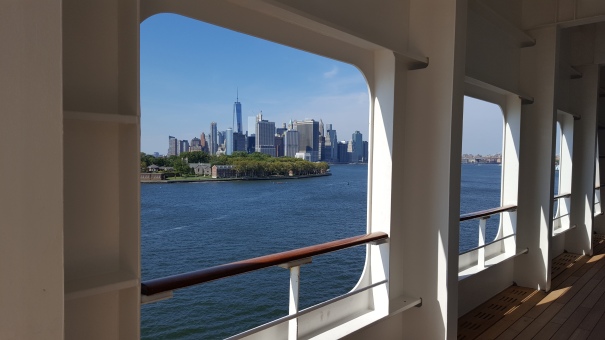 Both of my voyages with Cunard were wonderful and they have each left a lasting impression. Within just a few days of me being back in the UK I was looking at other transatlantic voyages for the future, so watch this space because something big might be coming…and a Cunard food blog! 😉

See more of our road trip…

One comment on “Eastbound Transatlantic Voyage Aboard Queen Mary 2”

Categories
Recent Posts
My Tweets
Instagram
Take me back to lands where the #palmtrees sway! ❤⚓🌍 Where the waters are crystal clear and the air is warm. World, we miss you!
It's time for more #sunset lovin' and then I'll stop. Well, for a few days! 🤣 If there's one thing I REALLY miss about #cruising it's sitting on deck watching this. Nothing else matters in that moment. ❤🚢⚓😍🌗⭐
Follow CruiseMiss Cruise Blog on WordPress.com
RSS Links
Loading Comments...
Comment
×
%d bloggers like this: