Ovation of the Seas sailed into Southampton on Sunday April 10 and I was on the waterfront in Hythe waiting to greet her. It’s not very often that I get to see these majestic beasts arrive, as I live in the north of the country, but Sunday was my lucky day and Monday would see me board her for a 1-night ‘shakedown’ visit.

Thanks to Royal Caribbean’s smart check-in, I was through the terminal door, onboard the ship and in my cabin all within 20-minutes! I had a balcony cabin on Deck 11 and it was beautiful – I love the stateroom décor on the Quantum-class vessels and Ovation didn’t disappoint. Overall, the stateroom is incredibly spacious, but I do feel like it lacks in wardrobe space. One thing that can’t be frowned upon, however, is the bed. They are so comfortable and with all that soft, fresh linen from the Royal Bedding Collection, it’s like sleeping in a giant marshmallow. 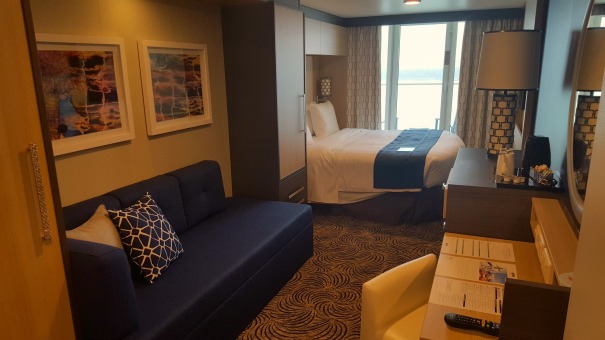 I explored as much of the ship as I physically could in the short time that I was there – it really was, in many ways, just like being on Anthem of the Seas, but there were one or two differences. You won’t find Johnny Rockets on Ovation of the Seas, but in its place on deck 14 you will find the rather tasty Kung-Fu Panda Noodle Bar. Some of the stores onboard Ovation were also different to those on other vessels within the fleet: Kate Spade has made an appearance as has the largest Cartier store at sea!

Jamie’s Italian, Chops Grille, Bionic Bar, Schooner Bar, SeaPlex, FlowRider and many more are all still present. The Music Hall could also be found onboard, which was my favourite of all the entertainment venues on Anthem of the Seas. Apparently, there had been talk originally of that venue not being added to Ovation of the Seas, but it is there, albeit a little smaller than it is on Anthem.

I had a look around a few other staterooms during my exploration, including the Royal Loft Suite and a Virtual Balcony cabin. The Royal Loft Suite was incredible! It was right at the aft of the ship and offered stunning views and two balconies – one with a hot tub! Guests booked into such a suite can now also enjoy a new introduction to Royal Class accommodations, the Royal Genie. Your Royal Genie takes your VIP status ship-wide by scoring you exclusive access to the best of everything onboard. Every show. Every restaurant. Every activity. It will feel like the entire ship is yours as you enjoy one-of-a-kind experiences from bow to stern. Inclusive amenities elevate every aspect of your cruise, like complimentary drinks, specialty dining and VOOM high-speed Internet. Basically, your Royal Genie is on hand for any need or desire you may have during your time onboard. They all attended the British Butler Institute, the world’s most exclusive butler and front of house school, so you know the level of service offered is going to be second to none. 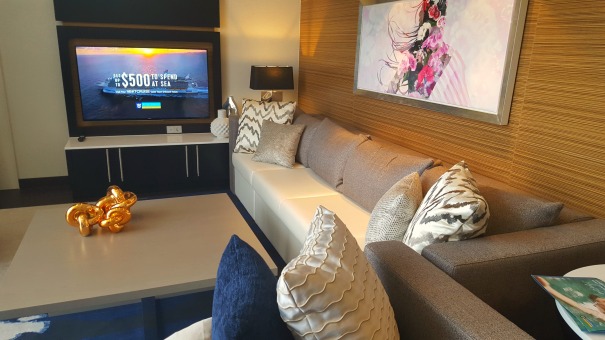 The Virtual Balcony cabin was quite interesting. I’d never seen one before and I really do like the concept of it. I would be tempted to book one of these if my only option of stateroom was an inside cabin. Apparently, you can change the screen to various different images from webcams around the ship, the view when I entered was of a car park, but I’m sure more exotic locations await!

One thing that did grab my attention on Ovation of the Seas was the art work, all 11,000 pieces! I often feel like some of the art onboard cruise ships can be a little drab and boring, but Ovation had surprises around every corner! I particularly liked the below piece, which I spotted just by chance on the Royal Esplanade. Ovation of the Seas entire collection is worth over $3 million!

After my epic exploration and a brief press conference it was time to freshen up for dinner, and that evening I was dining in Chops Grille – my favourite of all the dining venues available with Royal Caribbean. We didn’t have the offerings of the full menu, but a shrimp starter and the 9oz filet mignon made an appearance, so that’s exactly what I ordered. The meat was cooked to absolute perfection! I like my steak well done, although sometimes that can mean it goes quite dry, but the steak in Chops was deliciously juicy and accompanied by fries and creamed corn, it was simply perfect.

Following dinner, I went along to Two70 and watched the comedian for a little while before heading up to SeaPlex to check out the roller skating, well, there were people in roller skates but most of them were falling instead of skating – it was quite funny to watch. I’m sorry if that makes me sound like an awful person, but I was raised to tell the truth! 😉

Ovation of the Seas has a few cruises operating out of the UK before she heads for her home in China – it’s sad to think that UK shores may never see her again once she leaves, but Royal Caribbean has said that they hope to bring a Quantum-class vessel back to the UK, they just can’t say when. I guess we wait and see what the future brings…